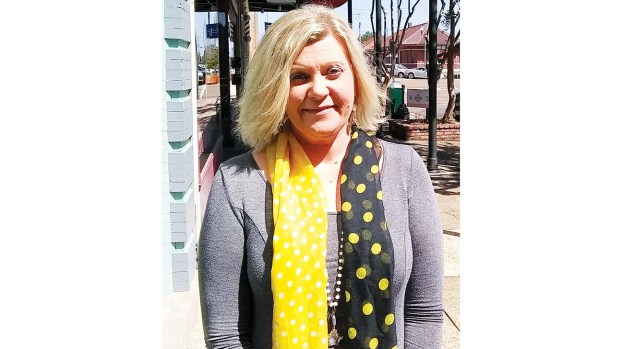 Meet Michelle Lovette-Tarver. She’s 45 years old and works as an interior designer for Flooring Warehouse in Brookhaven. In August, she celebrated her two-year anniversary with her husband Skip Tarver, who works as a project supervisor for River Oaks Construction. Her parents are Jimmy and Kathryn Lovette.

Lovette-Tarver grew up in Wesson and graduated from Loyd Star Attendance Center. After graduation, she attended Copiah-Lincoln Community College where she minored in Spanish and received a degree in political science.

Interior design is a very different path from that of a politician, but Lovette-Tarver said she’s always been interested in design work, and she’s been working in the business for 15 years.

“Everybody said I had an eye for design work,” she said. “I fixed things around the house and painted. I’ve always done that. I would move furniture around and redecorate.”

Lovette-Tarver said the surrounding architecture is an important building point for her work as interior designer. Often, Lovette-Tarver says she works off of little more than a photograph and a color.

“A lot of the time they might not have any ideas,” she said. “They might come in and say they need to do a custom shower or a custom kitchen. So we just pick a tile and my imagination goes wild.”

Creativity is an important part of interior design, and Lovette-Tarver said the designer shows on television don’t usually capture the full difficulty of the craft. Lovette-Tarver said many shows make an interior project look like it happens overnight, when the reality is it’s a process that could take several weeks.

“They really make it look easy,” she said. “Let’s just pick a tile and do this, this and this and just stick it together and there it is. It is a huge process. There is a craft to it. It doesn’t all just fall together.”

Lovette-Tarver describes herself as family oriented, and in her off-time she enjoys playing tennis and golf. She is a member of Heucks Retreat Baptist Church.

She’s also an active volunteer for the community. She is a member of the Brookhaven Trust, an organization dedicated to preserving Brookhaven’s history. She’s a committee member for Relay for Life for Copiah-Lincoln, a fundraiser for the American Cancer Society. She also volunteers with the Brookhaven Animal Rescue League.

“I learned from watching my parents while growing up the value of helping others,” she said. “It gives me great satisfaction to be able to devote time to the organizations I love. I hope the time I can give back to my community through my volunteer work helps in some small way.”