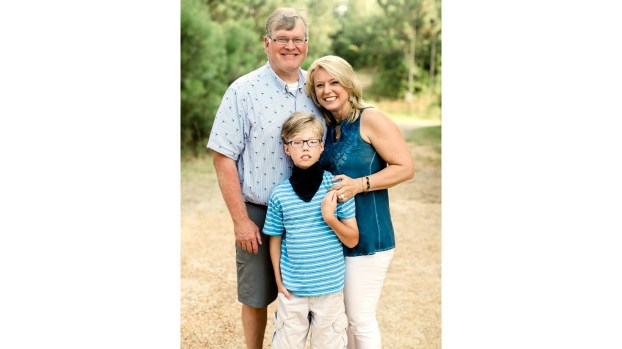 Photo submitted Terry, Deana and J.T. Pendley are in the running for Disney’s Point of Light Volunteer Family of the Year.

Local family is in semi-finals to win Disney honor

A Brookhaven couple and their son are in the running to become the first Disney “Points of Light” Volunteer Family of the Year.

The Brookhaven Animal Rescue League nominated Deana Pendley along with her husband, Terry, and their 11-year-old son J.T. for the honor.

The Pendleys were selected by Disney after a nationwide search and thousands of submissions and have advanced to become one of the Top 30 semi-finalists in the competition, said Beth Adcock, a BARL volunteer.

“While all volunteers are blessings and inspirations to the organizations they serve, there are some whose inspiration reaches a different level,” Adcock said. “Even more, when those volunteers are a family, it’s quite special. The Pendley family is just such a group of volunteers.”

Adcock said the Pendleys are a team when it comes to volunteer work.

“About three years ago, Deana decided she wanted to help the local animal shelter when and where she could. Of course, like most working moms, she had to balance volunteering with work and family,” she said. “Therefore, if Deana were to help the Brookhaven Animal Rescue League much at all, it would take a team effort.”

The Pendleys made a plan. Deana would be hands-on with BARL and Terry would help with J.T., who has a congenital chromosomal disease that causes severe muscular weakness across his entire body.

Pendley took on the challenge of fundraising for the non-profit, no-kill shelter.

“To say she simply met those challenges would be a gross understatement,” Adcock said. “Deana knows how to coordinate people and the tasks they should be doing. She knows how to get the most out of others.”

Pendley includes J.T. in the volunteering, too.

She heads up “The Cat’s Meow” rummage sale each year and BARL receives hundreds of donations, including plenty of kids toys, which J.T. helps sort.

Pendley is also in charge of BARL’s annual Celebrity Dinner, which will be held at the Lincoln Civic Center Oct. 22. Best-selling author Jill Conner Browne, also known as the “Sweet Potato Queen,” is this year’s celebrity guest.

“Several volunteers have caught J.T. talking to the animals. J.T. takes his volunteering seriously. He might be somewhat limited physically, but this is only a part of it all,” Adcock said. “J.T. and his mom share something — a big heart. They have a heart for helping others, but, even more, they have a heart for pushing themselves to give their all at whatever they are pursuing.”

Non-profits and schools around the country have nominated families in their communities who exemplify the power of volunteering together. The Top 30 will be narrowed down to five finalists, who will be announced on “Good Morning America” Oct. 7-11. The public will help choose the winning family by voting in a nationwide online poll.

The winning family will receive a trip to Walt Disney World Resort for a weeklong dream vacation — and will join Disney for a super celebration on Family Volunteer Day, Nov. 23.

If the Pendleys are chosen, BARL will receive $10,000 to continue its work in the community. BARL is a volunteer-based, limited-admission animal welfare organization serving Copiah, Franklin and Lincoln counties. BARL provides food, shelter and veterinary services for homeless animals until they are adopted.

All BARL animals are vaccinated and spayed/neutered.  Dogs are also micro-chipped.  Anyone interested in adopting, contributing, or volunteering should contact BARL at 601-757-4367 or info@barl.net. Donations are tax deductible.

A few of BARL’s adoptable animals may be viewed online at www.barl.net or on their Facebook page.