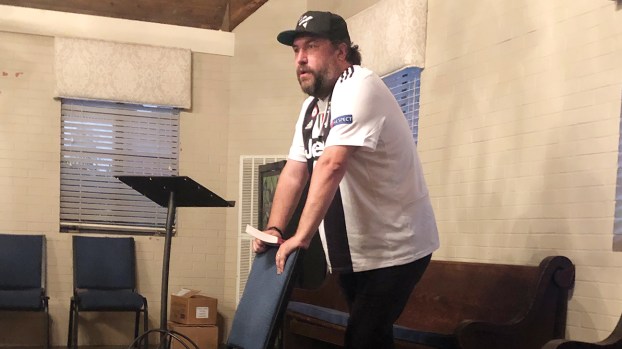 Photo by Cliff Furr Author Wright Thompson recently spoke at a joint meeting of three Brookhaven area book clubs. A sports journalist who writes for ESPN, Thompson has a collection of his work titled “The Cost of These Dreams” that was released earlier this year and appeared on The New York Times bestseller list.

Spend a little time with Mississippi native and journalist Wright Thompson and it’s not hard to understand how he gains the access that he does for his work. You don’t get to be a fly on the wall with Michael Jordan and his inner circle by being a jerk or a wet noodle.

Thompson was in Brookhaven two weeks ago for a private reading from his collection of stories, “The Cost of These Dreams.” The book was released earlier this year and he came on the invitation of Mike Smith and the MDT Book Club. Thompson spoke to the club and also answered questions and read at a joint meeting with two other local book clubs.

A son of the Delta, Thompson was born and raised in Clarksdale. For the last 14 years he has written for ESPN in a variety of formats. His work appears on the website and magazine for the network and he can often be seen on Outside the Lines and SportsCenter.

His career began in the newspaper business after he graduated from the University of Missouri, first at the Kansas City Star and then at The Times-Picayune.

The grind of an investigative newspaper reporter is still one that Thompson can pull off as he often covers a subject for months or even years — digging into the deepest details and following rabbit holes until they hit bedrock.

A great example of that doggedness was his search for Jimmy Robinson, one of the 50 men to have fought Muhamad Ali as a professional. Robinson had disappeared into a street existence in Miami and Thompson returned to South Florida time and again to turn over new stones in search of him.

Not every athlete gives Thompson the access that he was afforded with Jordan. Tiger Woods demands discretion and trust from all those who surround him. Thompson was repeatedly denied interviews as he wrote a long look at the years between the death of Tiger’s father Earl and the very public end of his marriage.

The day the piece dropped it was front and center on espn.com as the network rolled it out with pomp and circumstance. Thompson did wall-to-wall TV appearances with network talking heads as he delved into Wood’s obsession with Navy Seals he had befriended and the toll that training with them took on his body.

For Thompson, the hay was in the barn and he was ready to head back to his home in Oxford, but he wasn’t sure how many more times he’d be called on to talk about Woods on camera. Then the news broke that Prince had died. Tiger Woods was bumped from the top story of the day and Thompson was home a little earlier than he had planned.

Home has become even more important to Thompson after the birth of his daughter Wallace. The way he writes about Wallace and his wife Sonya in the preface of his collection is some of the most beautiful prose in the book. He’s become what he once mocked, the dad with an iPhone filled with pictures of his child during every milestone or mundane event.

Due to our age and upbringing, Thompson and I are contemporaries. We like the same music, watched the same games as teenagers, and read the same issues of Sports Illustrated as kids. He was my favorite follow on Twitter before he had to delete the app from his life.

What made his Twitter so good was how real he was, a no-bull version of himself. His thoughts along with what he was reading or watching at the time. That realness also meant that if someone said something bad about his Momma he was ready to meet up in a field in Merigold to fight and defend her honor.

Now the only social media attached to his name is an old Facebook profile that he can’t remember the login information for anymore. It lives on and may continue to do so forever. Thompson and his wife are building a second home in Montana. He’s famous, but comfortably not too famous. He doesn’t take himself so seriously and choosing to come speak at a book club meeting in Lincoln County feels like a natural fit.

His next book is in the editing phase. It’s about one of the most acclaimed family of bourbon makers in the country. If it’s not real, if it’s not interesting — then Thompson isn’t going to write about it. His employer lets him choose his topics and he follows the threads that stir up the most passion. European soccer and World Cup of cricket are just two examples of the sports that Thompson has turned his keen eye towards.

He’d never visited The Home Seeker’s Paradise before this visit, though he attended Boy’s State at Co-Lin while a teen. Thompson was very complimentary of the Brookhaven he saw while in town — he was blown away by the blueberry sausage from Diamond J Meat Market that was served at one event.

“The Cost of These Dreams” collects some of his best-known stories. All were previously published online or in a magazine. All deal with sports on the surface and something much deeper below. Most deal with fathers, sons, family or what drives those who yearn to be great at their craft.

Asked why he continues to live in Mississippi, a place that as a teenager he swore he would leave one day to never return, Thompson, who usually travels over 200 days a year, said, “I’ve found that this is the place where everything still makes sense for me.”

“The Cost of These Dreams” can be purchased at all major booksellers, online and in-store.

The Lady Cougars finished as runners-up in their district after a 5-2 loss last week at Cathedral. BA opens the... read more