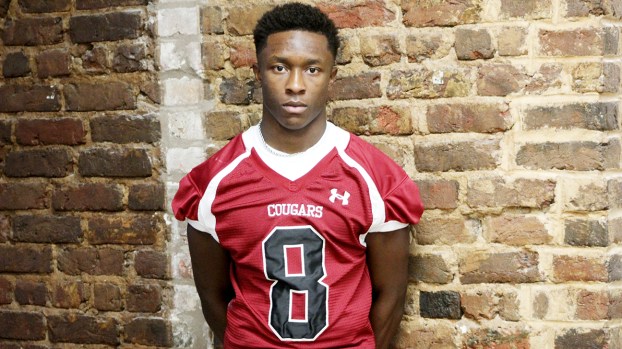 Give Lawrence County senior running back Kylan Cooper a crease and you’ll find yourself seeing nothing but the back of his jersey. Friday night against Wesson Cooper rushed 14 times for 229 yards and four touchdowns. For his outstanding performance Cooper has been named The Daily Leader Offensive Player of the Week.

It’s the second time for Cooper to win the award this season. On Aug. 30 against Brookhaven High, he gained 234 yards on 11 carries and shared the honor with teammate Antwan Pittman.

On the season Cooper has run for 887 yards through six games. He’s averaging 9.5 yards per carry and has scored 12 times.

Against Wesson in the final non-region game of the season for LC, Cooper scored three times in the first quarter.

Wesson used an onside kick to start the game and try to catch the Cougars by surprise. LC recovered on their own 49 and marched down the field powered by a 26-yard run by Pittman. Two plays later Cooper punched one in from five yards out to put his team up 7-7.

The Cobras responded though with a 45-yard TD pass. Cooper would run for 19-yards on one carry and 14 on another carry on the next drive as the LC double wing offense began to grind away. He capped the possession with an 8-yard scoring run that put his team back up 14-7 with 6:24 left in the first quarter.

A Wesson 3-and-out gave LC the ball back quickly thereafter and Cooper struck again, this time from 18-yards out.

Coach Jeremy Loy and his group of snakes didn’t stop fighting though. In the second quarter they cut the lead to 28-18 and had driven all the way down to the LC 11-yard line before a sack on 4th-down gave the ball back to the Cougars.

That set up Cooper’s biggest run of the night, one that came with just 22 seconds left in the half as he shot out for an 81-yard touchdown run that dampened the hopes of a Cobra comeback.

The LC ground game would continue to roll in the second half as they won going away 57-30.

Expect more of the same from Cooper this week as the Cougars open Region 6-4A play with a trip to Raymond. Next week is the biggest game of the season thus far for LC coach Jesse Anderson and his team as they travel to Magnolia to play the No. 1 ranked team in 4A, South Pike.

The ultra-stingy South Pike defense is giving up just six points per game while the LC is averaging 303 yards rushing per game.