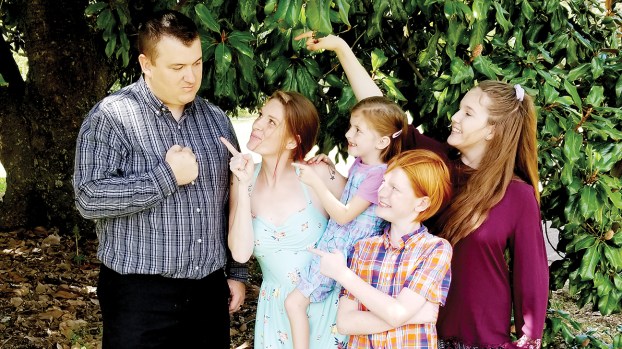 Photo submitted United States Army Staff Sgt. Jeffery Grimes surprised his family in Enterprise recently with his return from deployment to Kuwait. Pictured are, from left: Grimes, his wife Holly, and their children Amelia, Leonidas and Stardust.

Staff Sgt. Jeffery Grimes planned a big surprise reveal for his family when he returned from Kuwait, but the biggest surprise was on him — they weren’t home.

“I expected to walk in the house and none of them expect me to show up and it be that kind of a surprise,” he said.

Grimes spent the past year as a chaplain’s assistant with the 184th Expeditionary Sustainment Command in Camp Arifjan, Kuwait. He served as an administrative logistical and tactical specialist of the unit ministry team, which meant his job was to ensure that religious support was offered to meet the needs of soldiers through the U.S. Central Command area of operations.

His unit arrived back in Texas at Fort Hood in mid-September and his wife, Holly, knew he was there, but their children — 14-year-old Stardust, 12-year-old Leonidas and 7-year-old Amelia did not.

What Holly Grimes didn’t know, though, was that he was getting to leave the base a few days earlier than she expected.

After three deployments, he was finally able to plan a surprise reunion.

“I’m a big kid at heart. My last two deployments I was single. I didn’t have a family to come home to. I wanted that experience,” he said.

Though his wife wasn’t excited about it, she agreed to let him keep his arrival home a secret.

“I hate surprises,” Holly said. “I would have loved to know when he was coming home. I told him, ‘I don’t want to be walking around in sweat pants looking all frumpy. I’d like to throw on some mascara and make sure I shave my legs.’”

His flight from Dallas-Fort Worth International Airport was set to leave at 5:09 a.m. Sept. 14. He got up at 2:15 a.m. and cleaned the barracks, getting everything ready to go.

He calculated he’d be in Jackson by 8:35 a.m. and he’d be home in Enterprise by 10 a.m. several hours before she planned to leave for her parents’ house near Monroe, Louisiana, where Leonidas had been spending his summer.

She’s not a morning person so he figured she wouldn’t leave until afternoon to go to Louisiana and he’d be there in plenty of time to surprise them, he said.

Then the plan began to go awry.

There was a problem with the unit’s luggage truck so the troops had to wait on another truck. That put them at the airport in Killen, Texas, at 4:30 a.m. Only four soldiers were able to check in before the gate closed.

Grimes was fifth in line and missed the flight to Dallas.

Another soldier was upset about the missed flight, so Grimes stepped outside with her to calm her down. When he came back in, the other seven who missed the first flight were lined up and he was at the end.

For the second flight, four soldiers got on including the soldier he helped.

He was out again.

The attendant tried to get him on the next flight, but that 50-seater airplane with four vacant seats was changed to a 44-seat plane that was now overbooked.

He called a sergeant for a vehicle to ride to Dallas-Fort Worth. He and the other three soldiers who needed to go to DFW caught a ride when the vehicle from Fort Hood dropped off the next batch of soldiers.

Grimes made it to Dallas and was waiting for the flight that would take him to Jackson when he received a text message from Holly. They were already on their way to Louisiana for the day.

His plane arrived in Jackson at 2 p.m. He headed for the rental car, but there was a problem with the reservation — his debit card couldn’t be used to get the car and Holly had the credit card. And calling his wife would ruin the surprise.

His backup plan was a chaplain in Jackson, but he was leading a retreat that day and couldn’t get away.

He finally found a friend who could come pick him up and bring him home to an empty house, where he hid underneath the security camera so Holly wouldn’t see that he was home.

“What’s funny is she’d actually looked in on the house and was showing her dad some things with the security cameras,” he said.

Instead of playing catch-up with his family that he hadn’t seen since Thanksgiving, he played games on his phone while sitting in a chair under one of the cameras. When he figured she’d almost be back home — around 5:30 p.m. — he called to check on her and discovered she was still at her parents’ house three hours away.

That meant a lot more hiding.

He’d been tracking her progress home on Google, so when she was close enough to the house that he figured it was safe, he went into the kitchen to get ready for the surprise.

On the security footage that has been shared numerous times on Facebook, Leonidas can be seen walking in and screaming when he spots Grimes. He immediately hugged his dad and Stardust walks in. Grimes holds his arm out for her, but she just stands there, yelling for her mother. Holly wastes no time running in and leaps into his arms. Then Amelia skips in and squeezes in past her brother to give her father a hug.

Grimes laughs at the video that shows Stardust still standing in shock with her hands over her mouth while the rest of the family is in a group hug. She leans back on the kitchen counter, takes a deep breath and finally joins in.

“My brain didn’t even really process it. It was so shocking. I wasn’t expecting him to be there,” she said.

This was Grimes’ third deployment. His first came in 2004, the same year he graduated from Enterprise Attendance Center. He spent a year in Iraq with the 155th Armored Brigade Combat Team. He went back to Iraq in 2009, still with the 155th.

With a few more years left to serve before he’s eligible for retirement, he knows there is a possibility he’ll be deployed a fourth time.

That will be hard on his family, though they’ve learned to share him with the troops.

“You feel like this isn’t fair, but then we remind ourselves that this is what he does because there are people out there that need him. Especially being a Christian, that helps so much because we rely so much on God,” Holly said. “We try to raise our children to respect all faiths and we are very strong Christians in our home.”

She struggled to explain Grimes’ absence to their youngest.

“I told her, ‘Sometimes that’s the only time that people hear about God is just talking to your daddy,’” Holly said. “So as hard as it was for us to give him up for that time period, we have to go, ‘OK, there’s a reason for this because how many other people need him more than us?’ He might be saving a life or he might be bringing God to somebody who otherwise wouldn’t know who God was, or he’s out there doing things that help protect our country.”

At least in October, Thursday is the day for music in downtown Brookhaven. For the past three years, local musicians... read more