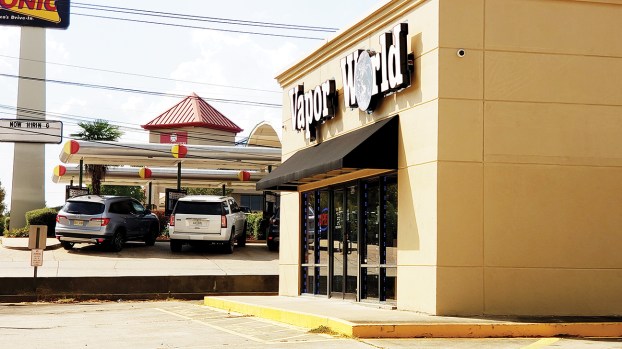 Photo by Donna Campbell Vapor World, one of several shops in Brookhaven devoted to the sale of electronic cigarettes and accessories, recently opened on Brookway Boulevard.

City aldermen have put a temporary stop on any new vape shops opening in Brookhaven until state and federal agencies can study the possible harmful effects of e-cigarettes.

The board passed a moratorium that began Tuesday at midnight to prevent any more shops to open that sell or promote the use of vaping products and services.

“Over the past few weeks, based upon investigation, concern has elevated due to a number of deaths attributed to the use of vaping,” city attorney Joe Fernald wrote in the moratorium. “Said deaths have initiated investigation by federal and state agencies concerning vaping, and substances employed in vaping. Further, based upon information, the practice of vaping is unregulated.”

The Mississippi State Department of Health on Sept. 26 reported its first vaping-associated death, an individual under the age of 30. The state also has four identified cases of serious lung injury related to vaping, all in individuals between 18 and 34 years of age.

Nationwide, as of Sept. 24, the Center for Disease Control reported 805 confirmed and probably patient cases of lung injury associated with vaping in 46 states and the U.S. Virgin Islands and 12 deaths in 10 states including Mississippi.

Mississippi is part of a national investigation into severe pulmonary disease or lung injury linked to the use of e-cigarette products, or vaping, according to a news release from MSDH.

State Epidemiologist Dr. Paul Byers said many of the cases in the US report vaping cannabis products, such as tetrahydrocannabinol, or THC, some have reported only vaping nicotine products. However, no specific product such as the device, liquid, refill pods or cartridge has been clearly identified as the cause of illness.

Fernald is hopeful the Food and Drug Administration and the State of Mississippi pass legislation that outlaws the products outright.

“Some places have done that. Some towns have done that,” he said. “Given the incidence of people who are dying, I know there are hearings set in Washington on this subject and I think the legislature, based on what I’ve been told, they’re going to look at it, because this business is largely unregulated.”

He said if federal and state authorities determine vaping is harmful and put restrictions on businesses that forced them to close the city would not allow the shop to reopen.

“I realize we have people coming here and selling their product, and that’s all well and good, they have a right to do that, but the problem is, now there’s evidence coming up that the products that a lot of these places are serving are not good,” he said. “I’d much rather have the State of Mississippi pass a law that says you can’t do this than for us to do it.”

Alderwoman-at-Large Karen Sullivan suggested the moratorium at the Sept. 17 meeting of the board and made the motion to approve it Tuesday night. Ward 4 Alderman Jason Snider gave the second and the motion passed 6-0. Ward 1 Alderman Dorsey Cameron was absent.

“I think it’s our job to look out for the safety, health and welfare of our citizens,” Sullivan said.