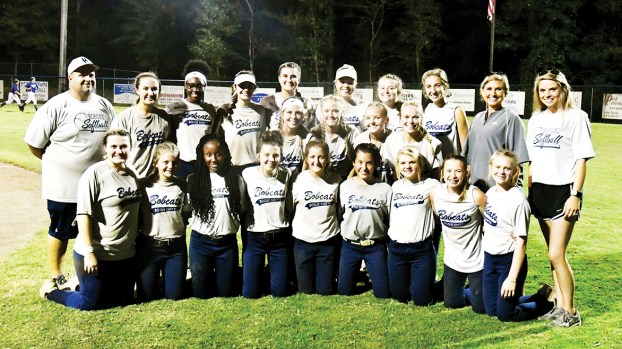 Photo by Stacy Leake The Bogue Chitto Lady Bobcats (14-6) captured the MHSAA Region 7-Class I slow-pitch title Monday night with an 8-2 win over Wesson. Coach Kris Smith and his assistants Candace McDowell and Mattie Ginn lead their team into the postseason on Saturday when they host Tylertown for an opening round game.

The Bogue Chitto Lady Bobcats (14-7) captured the MHSAA Region 7-Class I slow-pitch title Monday night with an 8-2 win over Wesson. Tuesday night BC closed out the regular season with a 15-4 loss to North Pike.

Bogue Chitto hosts Tylertown on Saturday in an opening round playoff series. The first game begins at 3 p.m. with game two to follow. If a third game is needed it will begin after the conclusion of game two.

In their district clinching win over Wesson the Lady Cats got 17 hits including a grand slam by Shyann Jackson and a home run by Julianna Frazier.

The Wesson Lady Cobras finished as runners-up in their district after dropping an 8-2 loss to Bogue Chitto on Monday.... read more