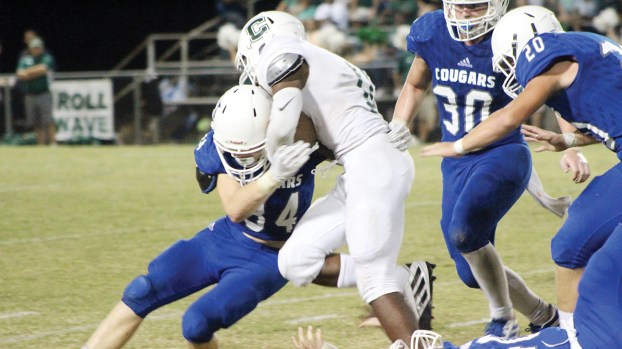 Photo by Cliff Furr Brookhaven Academy linebacker Collin Waldrop, here making a tackle against Cathedral, will be one of the Cougars most called upon tonight as BA hopes to slow down a strong ACCS rushing attack.

The game is part of a veterans appreciation night at the school. The athletic booster club is inviting current or retired military to get into the game for free. Besides providing free admission, the booster club is also giving a complimentary burger and drink to those that fit that criteria. For more information, contact Bethany Lewis of the booster club at 601-835-6464.

What the veterans and non-vets will see on the field is a young Cougars team playing a larger team for the second straight week. Last Friday the Cougars took their lumps in a 49-7 loss at 6A Parklane.

This week they’ll take on a 5A ACCS team that is traditionally very strong under the direction of head coach David King. King and BA coach Ron Rushing coached together at Trinity in Natchez and Rushing is an ACCS alum.

The Rebels had used a smothering defense — one of the calling cards of their program — to get shutouts in two of their first three games. Their first loss came in week four, 37-0 to Jackson Prep. The Rebs bounced back to whip Copiah Academy 35-10 before suffering a surprising home loss last week to Silliman Institute.

It’s not that the Wildcats from Clinton, Louisiana, beat ACCS, it’s how they beat them — 26-0 — that raised eyebrows.

The game will be the last non-district contest of the season for the Cougars. Next week they’ll host Riverfield Academy (6-0) in a game that will decide who wins the district. The Cougars will then close out their regular season with trips to Hillcrest (1-5) and River Oaks (1-5).

The Lawrence County Lady Cougars have won 12-games in a row ahead of their Saturday playoff series opener. On Monday,... read more