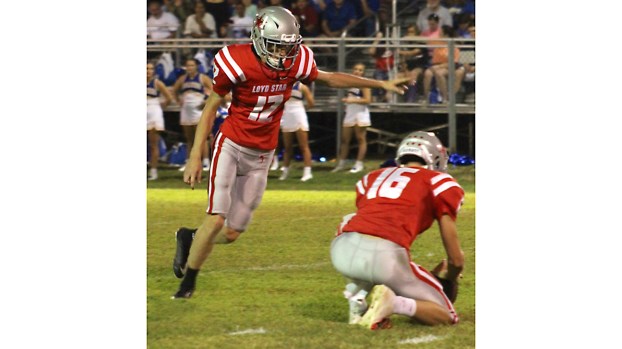 Photo by Katie Furr Senior kicker Payne Walker lines up a kick against Mize last week. Special teams play could be one of the deciding factors tonight when Enterprise travels to Loyd Star for the Sting Bowl.

The visiting Enterprise Yellow Jackets (1-5) and coach Trey Woodard will be healthier than they’ve possibly been since the season started. The same can be said for Loyd Star (1-5) and coach Brian Ford.

Expect both teams to run the ball as the Jackets have been led all season by senior back Dylan Vaughn. Vaughn runs behind a gritty offensive line and has gone for 516 yards thus far with three scores in 2019.

Loyd Star would like to use their depth at running back with Versie Wilson, Julius Smith, and Eric Birch all getting carries. The problem has been that all three have rarely been healthy at the same time this season. Smith has played in all six games and rushed for 176 yards while also catching seven passes for 36 yards.

Wilson has run for a team high 383 yards and four scores while Birch has come on of late with 118 yards on 28 carries after missing major time with an injury.

The key might be who can spring a big pass play as neither team has put the ball in the air much this season. Loyd Star senior quarterback Stephen Mills has completed 17 passes this season for 116 yards and one score. The duo of Donavin White and Lawson Chemin have split time at QB for EAC. Chemin has gone 11-of-21 for 68 yards and White has completed eight passes for two scores.

Last season Loyd Star ran away with a 61-22 win over the Jackets on their home field.

A homecoming ceremony will precede the game with football kicking off at 7 p.m.

Last season, the Bogue Chitto Bobcats jump started their season and pushed to a runner-up finish in Region 7-2A with... read more