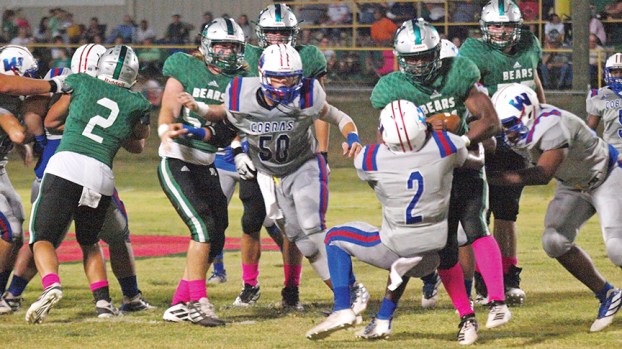 When the season started for coach Jeremy Loy and his Wesson Cobras junior Antrelle Sims was the starting quarterback and Loy’s freshman son Will was his backup. The plan was to get Will in for some packages as Sims had been a strong wide receiver as a freshman before moving to QB last year as a sophomore.

Loy inserted Will at quarterback against Mize and the freshman nearly sparked a comeback. His chemistry throwing the ball to Sims was undeniable.

Friday night against West Lincoln it was unstoppable as the Cobras (3-4) made their presence known in Region 7-2A with a 48-7 win over the Bears (3-4) on Perry Miller Field.

The big play was the weapon wielded best by Wesson.

A 44-yard pass from Loy to Sims set up a 1-yard pass to Terrance Haley that put WAC up 14-0. Their first touchdown came on a 12-yard TD run by Orlando Smith.

Damien Smith preceded that Orlando Smith run with an interception. Damien Smith also picked up a blocked field goal attempt in the third quarter and ran it back 69 yards for a score.

In the second quarter Loy hit Sims for a 41-yard passing score. Then it was Loy finding freshman Chris Davis for a 60-yard TD bomb with just 33 seconds remaining until the break.

An Enrico Price touchdown run got West Lincoln on the board in the third quarter.

With under a minute left in the third quarter Loy to Sims payed off again, this time with a 59-yard catch by Sims that put the Cobras up 42-7.

Orlando Smith would get another rushing TD in the fourth quarter to close out the scoring.

Severe weather moving through the eastern part of the state forced the Brookhaven High at Laurel High game to be... read more