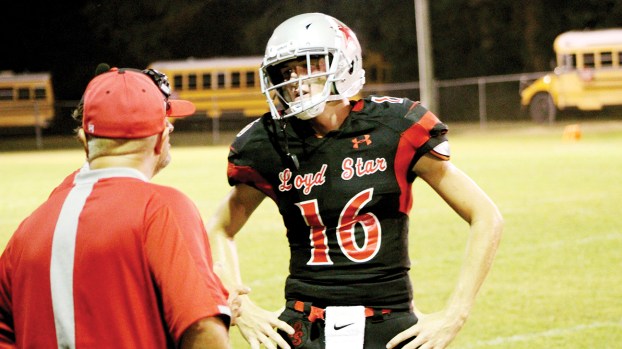 Photo by Cliff Furr Senior defensive back Stephen Mills collected a team high 13 tackles for Loyd Star Friday night to earn The Daily Leader Defensive Player of the Week. Mills also threw for over 100 yards in a 37-13 win over Enterprise.

Friday night Enterprise put together two straight scoring drives to start their region game at Loyd Star. However, the Hornet defense would dig in and not allow another EAC touchdown the rest of the night in a 37-13 win. A big part of that was the play of senior defensive back Stephen Mills who ran down the Jackets for a team high 13 tackles. For his big night stopping the ball Mills has been named The Daily Leader Defensive Player of the Week.

The Enterprise offense was methodical in those first two drives. Jet-sweeps by speedy junior Edrick McCray were working well to the outside. That then set up inside runs by senior Dylan Vaughn. Vaughn scored both short touchdowns runs that gave the Enterprise sidelines and fans a shot of confidence as Loyd Star only led 15-13 at halftime.

In the second half Loyd Star coach Brian Ford had Mills creeping up to the line of scrimmage more and working nearly as a linebacker when it became evident Enterprise wouldn’t often throw the ball deep.

Mills presence in the back end of the defense was especially important with junior Eric Birch out of the game early with an ankle injury. His play on the edge was crucial in slowing down the outside runs.

Leading the team in tackles isn’t new for Mills as he’s made more stops this season — 48 — than any other Hornet on the squad.

A first-year starter at quarterback, Mills also had his best passing game of the season against Enterprise as he finished 8-of-13 for 128 yards.

A three-sport athlete, Mills is a throwback to when high school kids played everything and did it all well. Last season he was a starter as a wide receiver and defensive back as a junior for the region champion Hornets.

When football season ends, he’ll hit the hardwood for coach Seth Britt and play on the perimeter for the Hornet basketball team. Last season he averaged 6.8 points per game as one of the primary ball handlers on as LS team that also won its region title.

In the spring Mills will see time as an infielder and pitcher for coach Jared Britt and the Loyd Star baseball team. As a junior he drove in 18 runs for a Hornet baseball team that — you guessed it — won their region.

The common theme you’ll hear the coaches is that Mills is a leader. Not a rah-rah guy who screams when he makes a big tackle. Not the type to throw up any kind of hand gestures when he sinks a three-pointer.

But the type of leader who is first in line for a drill, embraces the repetition and grind of practice and makes their younger teammates better with max effort.

One of only four seniors on the 2019 Loyd Star team, Mills and his Hornets are back in action Friday night as they travel to Liberty to face Amite County High School.

Copiah-Lincoln Wolves take on No. 6 Hinds CC Eagles in Raymond

For the third time in four weeks, the Wolves of Copiah-Lincoln Community College will face an NJCAA top-10 opponent. This... read more