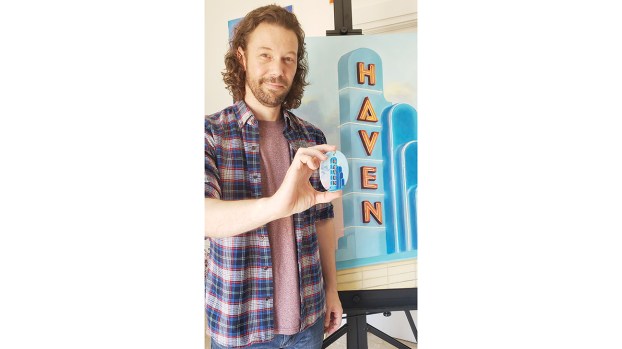 Photo by Donna Campbell Artist Derek Covington Smith holds this year’s holiday ornament for sale by the Lincoln County Historical and Genealogical Society. The Haven is the fourth in the series of keepsake ornaments the society has created.

Keepsake ornament offers ‘Haven’ to all

This Christmas, members of the Lincoln County Historical and Genealogical Society are hoping families will want to hang a little bit of history on their tree.

The society’s annual Christmas ornament is on sale and the fourth in the series of Lincoln County landmarks features The Haven theater.

Created from a painting of the historic landmark by artist Derek Covington Smith, the ornament captures the magic of the iconic marquee.

“I’m super honored. I’m so appreciative to be a part of it,” he said.

The ceramic ornaments are $25 and can be purchased at the LCHGS museum at 227 South Church St. when it’s open on Tuesdays and Thursdays from 11 a.m. to 3 p.m.

“This is Derek’s second time to do the artwork for the ornament,” said LCHGS Treasurer Tammie Brewer.  “He has been so giving of his time and efforts to the art community of Brookhaven. We feel very fortunate to have a local artist with Derek’s talent to take our ideas and create a one-of-a-kind image for our Christmas ornament.”

“It sold very well and we got tons of positive comments from the community,” she said. “We have already commissioned Derek to do the ornament in 2020. I’m looking forward to seeing what he creates.”

The first ornament sold by the LCHGS depicted the Warren Avenue Bridge, a wooden structure that sat at the intersection of South Railroad and East Warren avenues for more than a century. Built in 1903, the historic bridge was pictured on the 3-inch round ceramic ornaments. Only 100 of the commemorative ornaments were ordered and sold out in one afternoon.

The second ornament featured the Mary Jane Lampton Auditorium, which was constructed during the years leading up to World War I and was originally part of Whitworth College. Dr. Kim Sessums’ original sketch of the building was used.

The third ornament was of the Coffee Pot on South First Street. Constructed in 1931 by James J. Carruth and his wife, the two-story stucco Coffee Pot Inn was Brookhaven’s first drive-in restaurant, according to the Mississippi Department of Archives and History. The building also served as the Carruth family home and as a Greyhound bus stop in 1933. In 1936, Eddie Hinnant played a piano on top of the building nonstop in an attempt to break his record of 110 consecutive hours.

A few ornaments featuring the Coffee Pot and Lampton Auditorium are still available for purchase at the museum.

Brewer is thrilled that the Haven graces the fourth ornament in the series.

According to the Mississippi Department of Archives and History, the Haven was built before 1925 and was a movie theater first. A photograph in 1939 shows the Haven marquee as a three-sided canopy extending over the sidewalk. The Haven was remodeled after World War II and included a curved glass block half-wall in the ticket booth. The Brookhaven Little Theatre bought the theater in 1983 and produces plays and other events in the building. The Haven is significant for its art deco architecture and for its continuing contribution to the arts in Brookhaven and Lincoln County.

In 2006, the Haven was recognized as a registered Mississippi Landmark.

“Brookhaven Little Theatre is proud to call the historic Haven Theater our home and we are delighted to hear that our beautiful marquee has been chosen for this year’s Lincoln County Historical and Genealogical Society ornament,” said BLT Executive Director Emily Waterloo.

Money from the fundraiser helps pay for utilities, maintenance and insurance on the museum.

“We don’t receive any annual funding from the county or city any longer, so we have to rely strictly on fundraisers and donations to cover our major expenses,” Brewer said. “Our membership dues typically cover the majority of our utilities. We use the proceeds from the sale to cover all the other expenses at the museum and the many free programs we offer throughout the year for our members and the general public.”

The museum, which is open on Tuesdays and Thursdays from 11 a.m. to 3 p.m. and on the first Saturday of each month, is run strictly by volunteers.

“The goal of the Lincoln County Historical and Genealogical society is to help preserve the history of our county,” she said. “We are also currently selling a Lincoln County afghan, which features several historic buildings around the county. We feel it’s our obligation to keep these memories alive.”

The afghans are selling well, she said. They made a second order a few weeks ago and have just 40 afghans left to sell.

Students find their footing on Fields of Faith

Students from across Lincoln County and seven other counties in Southwest Mississippi gathered Wednesday night at King Field for the... read more