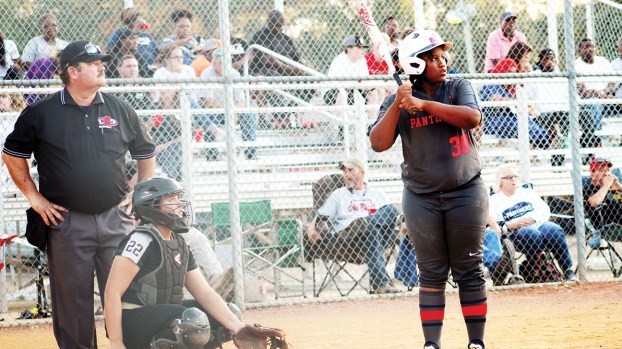 Photo by Cliff Furr Brookhaven High senior Lulu Cook readies for a pitch Tuesday against Northwest Rankin. Cook slugged a pair of home runs in the series but NWR would eliminate BHS 2-0 in the second round playoff series.

Lady Panthers eliminated in round 2 of playoffs

The Brookhaven High Lady Panthers (19-10) had their season ended Tuesday in the second round of the playoffs as Northwest Rankin swept the MHSAA Class II slow-pitch series.

In game one the visiting Lady Cougars from NWR wasted no time as they scored five runs in the first and four runs in the second to go up 9-0 in an eventual 12-2 win. Northwest outhit Ole 13-5 in the five-inning game.

Meg Foster and Angel Wilkinson each drove in a run for BHS in the opener. Wilkinson led the Lady Panthers at the plate with a pair of doubles. Madi Miller, Kaysha Register and Emma Campbell all hit safely for BHS.

Coach Mandy Vinson saw her team respond in game two as BHS scored two runs in the top of the first to go ahead of NWR. The Lady Panthers added one run in the second before Northwest scored two and cut their lead to 3-2.

A back-and-forth contest, the game was tied 6-6 heading into the final inning and after being the visitors on the scoreboard in game one, NWR had the advantage of being the home team in game two and getting the final at-bat.

Two straight singles and then a walk loaded the bases for Northwest in the bottom of the seventh and then a walk-off single gave the Lady Cougars a 7-6 win to clinch the series.

Senior Lulu Cook slugged a pair of home runs in game two while Kyja Willis added another homer for Brookhaven. Willis also hit a triple while Miller slapped a double.

For Vinson slow-pitch affords the opportunity for her team to polish their defensive skills ahead of fastpitch in the spring. The Lady Panthers outfield especially was an area where the team saw growth over the course of the slow-pitch season.

“I saw a ton of improvement through the entire season,” said Vinson. “We had girls playing new positions that they weren’t used to at all, but they really worked on those positions and did a good job. Our outfield was young experience wise. I only had one senior in the outfield and it was only her second year to play. They girls did a good job and really stepped up tonight in game two.”

Lady Bobcats on to 3rd round after sweeping Union

The Bogue Chitto Lady Bobcats (18-7) stayed unbeaten in the MHSAA Class I slow-pitch playoffs with a sweep of the... read more