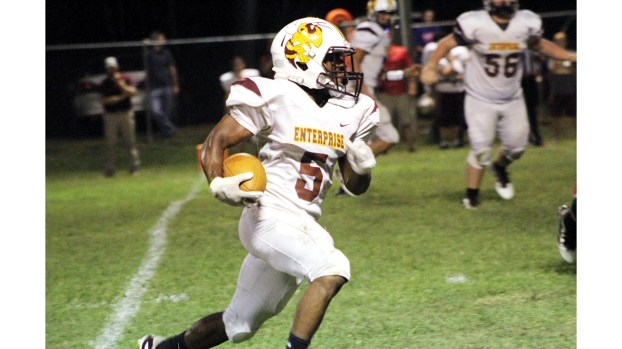 The West Lincoln Bears (3-4) and host Enterprise Yellow Jackets (1-6) are both looking for their first Region 7-2A win of the season Friday night when the two teams meet on Harry Cole Field at 7 p.m.

Enterprise is coming off a 37-13 loss to Loyd Star last week while the Bears went down 48-7 to Wesson.

The biggest key for EAC will be eliminating the types of penalties and mental miscues that hurt them in the second half against Loyd Star. The Jackets trailed only 15-13 at halftime after twice leading in the first half but stayed behind the chains instead of ahead of them in the second half as they couldn’t replicate their earlier offensive success.

Senior running back Dylan Vaughn has rushed for a team high 628 yards on the season while scoring four TDs. Speedy junior Eldrick McCray is back from injury and gives coach Trey Woodard another option on carrying the ball to the outside.

For West Lincoln and coach Brad Bland the ground game is also of the utmost importance. Senior running back Michael Brothern has carried the ball 72 times for 694 yards and 13 scores while missing one game due to injury. Brothern averages 115 yards per game and almost 10 yards per carry.

Enterprise will hope to keep the game close and limit big plays by the WL offense as the Bears carry a roster close to 40 while the Jackets dressed out 21 players last week against Loyd Star.

Panthers back at home to face Wingfield

After three straight trips to play two games in Jones County, including a game Monday at Laurel that was moved... read more