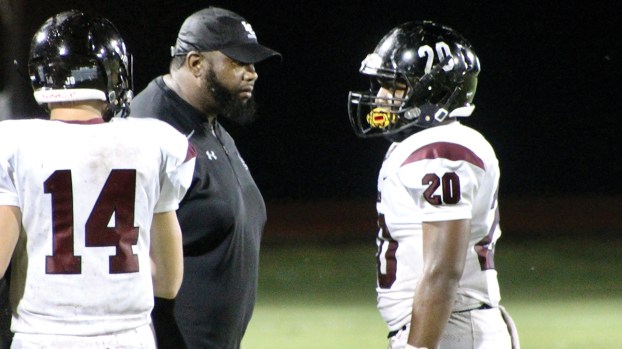 Daily Leader File Photo Coach Jesse Anderson and his Lawrence County Cougars are facing the No. 1-ranked 4A team in the state Friday night in the South Pike Eagles. South Pike is 7-0 and have won their region for two years in a row with perfect records both times.

The goal for coach Jesse Anderson and his Lawrence County Cougars (4-3) Friday night is to knock the South Pike Eagles (7-0) from the ranks of the unbeaten. The Eagles are the top-ranked 4A team in the state and are coming off a 28-18 win over McComb.

SP is coached by Brinson Wall and have an 11-game region winning streak. The Cougars and Eagles were longtime region rivals before LC moved to Region 7-2A for two years. This is the first season for LC to be back in Region 6-4A.

Last week Lawrence County had little trouble in getting their first division win with a 58-6 whipping of Raymond. Cougar senior running back Kylan Cooper is already over 1,000 yards for the season as he’s run for 1,124 yards and 14 touchdowns through seven games.

Getting yards against a stingy South Pike defense will be the key for the Cougars. Offensively the Eagles have speed to burn, led by quarterback Dontavious Turner. The senior signal caller has thrown for 755 yards and 14 TDs while also running for another 748 yards and nine touchdowns.

Wide receiver Alex Adams is the go-to receiver as he’s caught 16 passes for 345 yards and four touchdowns for the Eagles. South Pike trailed McComb 18-8 at halftime before a block punt returned for a touchdown ignited a second half comeback for the Eagles.

Kickoff in Magnolia is set for 7 p.m.

Lady Panthers eliminated in round 2 of playoffs

The Brookhaven High Lady Panthers (19-10) had their season ended Tuesday in the second round of the playoffs as Northwest... read more