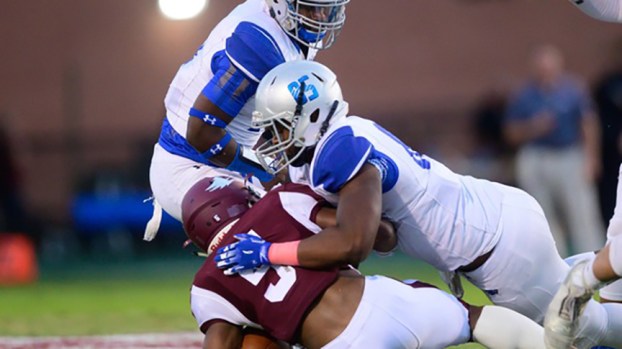 Photo by Co-Lin Sports Information The Co-Lin Wolves fell 35-21 in a division matchup against the No. 6 Hinds Eagles this week in Raymond.

Co-Lin falls to Hinds on the road

The Wolves of Copiah-Lincoln Community College dropped a South Division matchup against the No. 6 Hinds Eagles Thursday night in Raymond, 35-21.

The loss moves the Wolves to 3-4 overall on the year and to 1-3 in South Division play, essentially eliminating the teams’ playoff chances. Hinds improved to 6-1, 3-1 on the year. Co-Lin is back in Wesson next week for the final home game of 2019 as the Wolves take on the Jones College Bobcats for homecoming. The game kicks off at 3 p.m. in H.L. Stone Stadium and the day is filled with activities for alumni and fans. For a complete schedule visit www.colin.edu/alumni-foundation/homecoming.

The game started with back-to-back punts, but Hinds capitalized on great field position on their second possession. The Eagles took over at Co-Lin’s 36-yard line and scored just three plays later as Elijah Walker, the Eagles quarterback hit Javon Antonio for a 24-yard toss-and-catch touchdown.

Later in the first, Hinds once again had great field position as the Wolves were forced to punt out of the end zone. Co-Lin’s Jordan Davis cut that drive short as the sophomore forced a fumble that was recovered by Natrone Brooks. The Wolves were unable to capitalize on the opportunity and ultimately had to punt the ball away.

Hinds strung together a lengthy 12-play, 78-yard drive that took the game to the second quarter. Don Ragsdale, Hinds’ leading rusher, capped off the long drive with a one-yard halfback dive on the first play of the second quarter. With 14:59 remaining in the second the Eagles led 14-0.

Co-Lin refused to let Hinds take all the momentum as the Wolves came out firing on the ensuing drive. Danny Clark, Co-Lin’s quarterback, led the team down the field with big catches from Antoine Robinson and Malik Heath. The pass to Heath went for 28 yards and the team got an additional 15-yards on a facemask, putting the Wolves in the redzone. One play later Clark hit Robinson from 15-yards out for the Wolves’ first touchdown of the night. Bryce Lofton tacked on the extra point to cut Hinds’ lead to 14-7 with 13:01 left in the second.

The remainder of the second quarter was back-and-forth punting until Hinds took over at their own 22-yard line with 2:17 on the clock. The Eagles marched down the field in just under two minutes on 10 plays and scored as Walker hit Tabashi Thomas for a 21-yard score. The late touchdown gave the Eagles a 21-7 lead going into the locker room.

The Wolves got possession to start the second half and came out fighting. Co-Lin manufactured an eight-play, 84-yard drive that saw big catches from Dawson Brown for 23 yards, Robinson for 17 yards, and Heath for 21 yards. Co-Lin power back Lakenith Thompson capped off the drive from three-yards out. With 11:38 left in the third, the Wolves trailed Hinds 21-14.

After a short Hinds punt, the Wolves took over at the Eagles’ 39 yard-line and looked to tie the game. On fourth and two, Co-Lin went for it and came up just inches short of the yard to gain turning the ball over on downs. The Eagles responded with a seven-play, 70-yard drive. Ragsdale led the drive with rushes of 20 and 16 yards. The score, a Ragsdale run from four-yards out, put Hinds on top 28-14.

Dell Thigpen set the Wolves up on the next drive with a 35-yard kick return and just four plays later, Co-Lin was in the end zone. A big catch from Brown set the Wolves up before Clark hit Drexlan Allen out of the backfield for a 13-yard score. With 4:28 remaining in the third, Co-Lin trailed 28-21.

Hinds immediately snatched the momentum back with a 50-yard kick return followed by a 37-yard touchdown just two plays later from Walker to Traveyon Craig. The score grew the lead to 35-21 with 3:28 remaining in the third, a score that would hold until the end.

Clark finished the night 20-of-32 passing for 281 yards and two scores, while Allen led the rushing attack with 31 yards on 11 carries. Heath led the receivers with 74 yards on four catches, while Robinson finished with 70. Brown and Erick Rogers also had strong nights with 55 and 53 yards, respectively.

The Brookhaven High Panthers (2-5, 1-2) got back on the winning track Friday night as they took care of Wingfield... read more