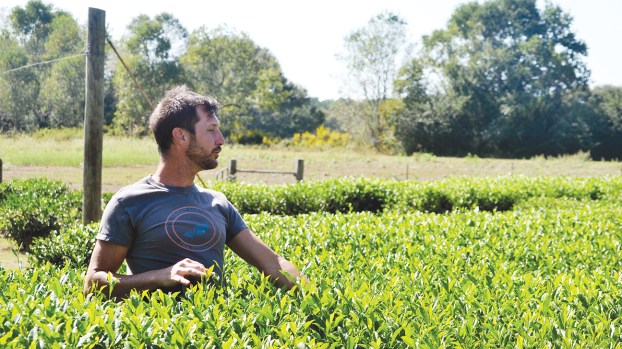 Photo by Aaron Paden Timothy Gipson, co-owner of The Great Mississippi Tea Company, stands among his tea crop while giving a recent tour of the farm.

Mississippi is known for a lot of things, but it isn’t known for its tea. One small farm, just down East Lincoln Road, is working to change that.

The Great Mississippi Tea Company is owned by Jason McDonald and Timothy Gipson. For years, McDonald was a timber farmer, but after Hurricane Katrina destroyed most of his trees, he set out to find a crop that could survive a hurricane and settled on tea.

“There has been a bit of a learning curve,” Gipson said.

The real difficulty was not the soil. Mississippi has an acidic soil that tea loves. While the heat can be a problem, tea loves Mississippi’s ample sunlight so much that the company covers their nursery so that the tea doesn’t grow so fast that it starts to impact the quality.

The real difficulty, according to Gipson, was in the timing. Most tea farmers around the world begin planting their crops in the fall. But that just wasn’t right for Mississippi, where the seasons are far from typical. Instead, the tea company plants their crops roughly following the schedule for pine trees, with new tea planted from January to mid March. It’s a schedule that has worked well so far. The company is now at over seven acres of tea, with plans to expand, and the farm can potentially harvest up to a ton of tea per acre.

It’s not perfect, though. Farming never is. Mississippi has seen an unseasonably hot and dry fall this year, and that hasn’t done the farm any favors. But despite some setbacks, Gipson is still out picking tea, mostly for sale to customers out of state.

Locally, the Great Mississippi Tea Company does provide guided tours, where there is an opportunity to sample and purchase tea. On Tuesday, the Gulf Coast Camellia Society chose Brookhaven as its annual meeting venue. Since tea also goes by the name camellia sinensis, the camellia society couldn’t pass up an opportunity to tour the local tea farm during the visit.

“We finally have more plants alive than we’ve killed now,” Gipson said. The comment drew laughs from the visitors.

Gipson and McDonald spent the two-hour tour explaining their processes to the group, and also their dedication to environmental sustainability. The tea farm is designed to minimize runoff and soil erosion. Currently, the farm does not employ pesticides.

“We reserve the right to use herbicides, but only when we have to,” McDonald said.

The Great Mississippi Tea Company can be reached at 601-823-4295. You can also contact them or purchase loose-leaf tea from their website at www.greatmsteacompany.com.

Forty-two years after a plane carrying Lynyrd Skynyrd to their next sold-out show crashed in a Southwest Mississippi swamp, a... read more