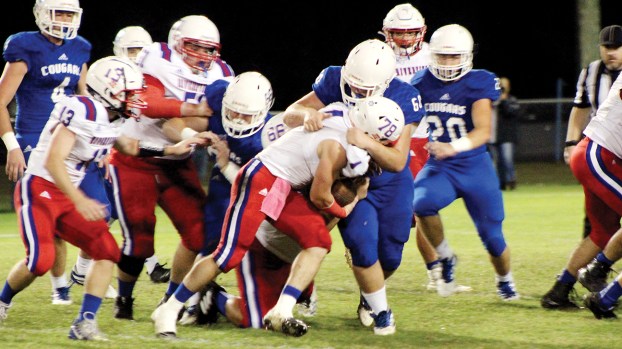 The Riverfield Academy Raiders (8-0) out of Rayville, Louisiana are still the lone unbeaten 4A team in the MAIS after getting past Brookhaven Academy (4-4) Friday night by a 20-7 final.

RA finishes in first place of 4A-District 4 with a perfect 4-0 record. BA (1-1) still has district games next week at Hillcrest and the following week at River Oaks to close out the regular season.

BA received the kickoff to begin the game as their first drive saw the Cougars moving down the field with short, quick passes spread out to Dylan Fortenberry, Nick Ogden and Collin Waldrop.

A penalty set the Cougars back to first-and-goal on the RA 18-yard line, but quarterback Tyler Fortenberry found Waldrop who made his way down to the 5-yard line. Riverfield senior defender Connor Bedgood made an outstanding play to strip Waldrop of the ball while going down and recovered his own forced fumble.

The Raiders then drove 95-yards and took a 6-0 lead on a Hudson Brakefield run from 12-yards out.

On senior night for the blue and white it was evident that the teams have rosters that differed in the area of experience. Riverfield dressed over 40 players with 15 being seniors. BA honored their four-man senior class of Nick Ogden, Harrison Brownlee, Jackson Logan and Gunar Brister prior to the game.

A big special teams play gave the Cougars life late in the second quarter as Tyler Fortenberry blocked a punt that was recovered by his brother Trey on the RA 40-yard line. Tyler then found Dylan for a fade to the back corner of the end zone from 16-yards out. The Corey Case PAT kick was good, and the Cougars led 7-6 with 6:14 remaining until halftime.

That scored held at halftime and after the break Riverfield took the second half kickoff and put together a 72-yard drive to regain the lead on an 11-yard TD run by Braxton Shelton that put them up 12-7.

The Raiders, coached by Boyd Cole, came into the game averaging 50 points per game. They have depth in their skill spots and are a team that thrives on deception and surprise. The offensive line often would be nearly standing straight up when the ball was snapped, as quarterback Garrett Brakefield then would pop out from behind them for big gains. Some of their biggest pickups came on passes born out of double reverses.

All that said, the Cougar defense played with a hard-nosed style to keep the game close. Tyler Fortenberry picked off a pass, Carter Smith recovered a fumble and Ogden had a team high 13 tackles.

The Raider defense never gave Fortenberry time to get comfortable throwing the ball though. They blitzed up the middle with linebackers and safeties and never allowed timing routes to hurt them after that first BA drive. RA harassed the sophomore Fortenberry into throwing four interceptions.

“The pressure bothered us and we never really got in a rhythm after the first drive,” said BA coach Ron Rushing. “They started mixing their coverages up. I’ve got to look at the film, I know we ran some wrong routes and had miscommunications that were self-inflicted.”

Riverfield iced the game with 5:28 remaining when Nicholas Heath scored on an 11-yard TD run. The Raiders gained 332 yards on the ground as Garrett Brakefield ran for a team high 152 on only nine carries.

12 teams make the MAIS 4A playoffs with the top four seeds getting a bye. There are 15 teams in the classification. Riverfield is the top ranked team in the class and is the only team to beat the second placed team, Tri-County Academy.

Rushing wanted his young team to know that going toe-to-toe with a team like Riverfield means his team can make a deep run when the playoffs begin in three weeks.

“Our defense played as well as they have all year,” said Rushing. “We’ve got to go back and figure out what we did wrong and keep working. We’ve got to stay together and win out so we can possibly host a home playoff game.”