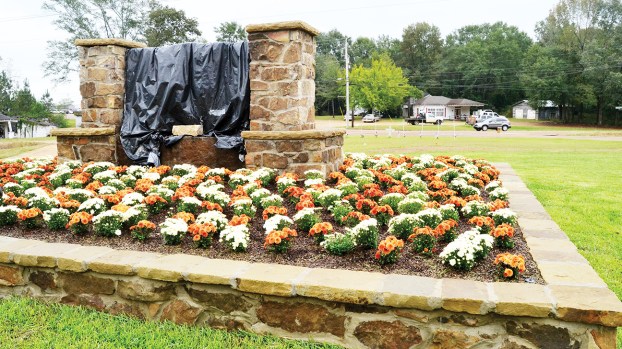 Photo by Donna Campbell A monument honoring the eight people who were fatally shot Memorial Day weekend 2017 will be unveiled Saturday at 10 a.m. at the corner of Bogue Chitto Road and Hwy. 51.

Mementos from the eight people killed in a mass shooting in Lincoln County in 2017 will be placed in a time capsule and sealed inside the memorial monument that will be unveiled in Bogue Chitto Saturday morning.

The front of the memorial includes a granite marker built into stone columns with the words “You will never be forgotten” and the names and ages of all eight victims listed: Deputy William Durr, 36; Brenda May; 52; Barbara Mitchell, 55; Toccora May, 34; Jordan Blackwell, 18; Austin Edwards, 11; Ferral Burage, 45 and Sheila May Burage, 46.

The names are repeated on the backside with a line of text for each that was contributed by the individuals’ families.

“Some put Bible verses, some put goodbye messages and various things on the back,” said Johnny Ray Hall, whose son-in-law was William Durr. Hall is part of BC Strong, a volunteer organization which spearheaded the fundraising and prayer events that have been held since the tragedy.

The monument will be unveiled at 10 a.m. Saturday. It is located at the corner of Bogue Chitto Road and Hwy. 51, which is designated as Deputy Donald William Durr Memorial Highway. It sits next to the Bogue Chitto Volunteer Fire Department and is on land donated by attorney Bobby Moak and the VFD.

Lights will illuminate the monument at night.

Eight magnolia trees were planted behind the monument and will eventually create a lush, green backdrop for the memorial.

Mums fill a planter that wraps around the granite marker for now, but the floral section will be changed with the seasons, Hall said. Upkeep will be financed through donations and fundraisers.

Events Saturday will begin with a BC Strong Prayer Walk/Run with registration from 7-7:45 a.m. at the Bogue Chitto Attendance Center parking lot. Rev. Eugene Edwards, grandfather of two of the victims, will offer a prayer just prior to the 8 a.m. start.

The walk/run will begin at the school parking lot and travel for three miles through the community. Water stations will be available along the route. ATVs, buggies and bicycles will be allowed.

Recent rainfall was significant enough for authorities to lift a burn ban in Lincoln and Lawrence counties. Supervisors in both... read more