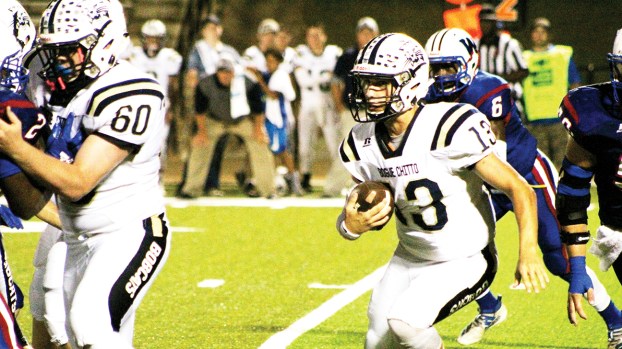 Photo by Cliff Furr Bogue Chitto quarterback Shaw King has thrown for over 1,000 yards in leading the Bobcat offense this season. King has passed for 10 scores and run for five more in 2019.

This series has had some hard-fought games over the past few seasons. Last year the Hornets won 36-16 in a game that was closer than the final score indicates. The win in the regular season finale clinched a perfect region record and a division title for coach Brian Ford and his Hornets.

In 2017 the Bears won 28-22 at home to secure second in the region and lock up their first-ever home playoff game.

In a 33-0 win over Enterprise last week, West Lincoln got 146 yards on the ground from senior running back Michael Brothern. Brothern carried the ball 12 times and scored once. Quarterback Travis Hall ran for a pair of scores for the Bears and sophomore Enrico Price picked up 107 rushing yards and one touchdown.

Loyd Star had success moving the ball last week against Amite County, but ultimately couldn’t go score-for-score with the Trojans in a 42-22 loss.

The Hornets continued to open up their passing game after having success throwing the ball the week before against Enterprise. Loyd Star senior quarterback Stephen Mills finished 12-of-18 for 152 yards and one score. Sophomore running back Versie Wilson had another big game, rushing 19 times for 123 yards. Mills was also a big part of the ground game as he rushed nine times for 100 yards and a pair of touchdowns.

Defensively, sophomore Brantley Walker made a team-high nine tackles, followed by Mills with six. Eighth-grader Seth Schrader made six stops. Jontorion Smith picked off a pass and recovered a fumble for the LS defense.

The closest geographical neighbors in the county meet tonight on Troy Smith Field when coach Trey Woodard and his Yellow Jackets make the less than 7-mile trip to Bogue Chitto.

The Bobcats and coach Gareth Sartin will roll out a passing offense that EAC must work to slow down. BC senior quarterback Shaw King has thrown for 1,110 yards and nine touchdowns in 2019. Four of those passing scores have gone to senior receiver Zach Upkins who’s caught 20 passes for 345 yards.

King has also run for 192 yards and five more touchdowns on the ground. Sophomore Colten Bales led the Cats with 93 tackles, and is followed in that category by a pair of freshmen, Cameron Williams and Jay May.

Junior Jordan Stephens leads the EAC defense with 65 tackles on the season. Senior linebacker Brodie Harris is second on the team with 56 and junior Josh Richardson has made 49 stops.

The Jackets moved the ball well between the 20s last week against West Lincoln, but were ultimately shut out 33-0.

Kickoff at Bogue Chitto is scheduled for 7 p.m.

The pomp and circumstance of homecoming week for Brookhaven High (2-5) ends tonight with a Region 3-5A matchup with South... read more