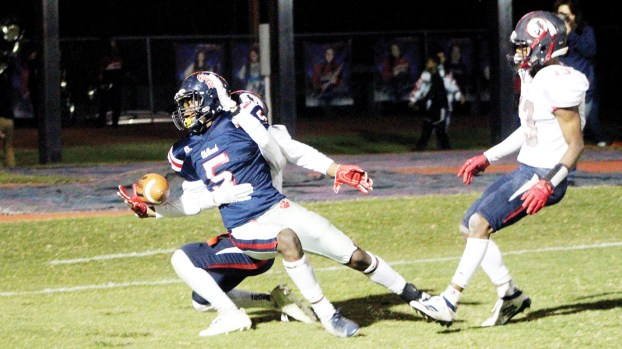 Homecoming 2019 was a real beauty for Brookhaven High fans and alums. The annual production that honors the returning classes drew rave reviews as always. Senior softball, soccer and cheer standout Madi Miller was crowned queen on King Field before the game. And the Panthers (3-5, 2-2) picked up their second straight Region 3-5A win with a 49-14 pounding of the South Jones Braves (2-7, 1-3).

Senior running back JQ Edwards was coming off a performance last week against Wingfield for which he was named The Daily Leader Offensive Player of the Week. Friday night against South Jones — in the words of Panther head coach Tucker Peavey — Edwards was running the ball like a man possessed.

Edwards kept his center of gravity low and his feet pumping as he broke off a 32-yard TD run to put the Panthers up 7-0 with 6:13 remaining in the first quarter.

His next scoring jaunt looked very similar as Edwards weaved through the line and sprinted past the linebackers to score from 37-yards out almost exactly five minutes later.

South Jones had some success early running dives between the tackles with powerfully-built junior running back Tegarrius Roberts. Roberts scored on a 4th-and-1 from the 3-yard line to pull SJ within 14-7 midway through the second quarter. The Braves were at their best when running right behind 6-foot-5, 325-pound junior offensive lineman Reid Gavin.

The Panthers would answer though with another touchdown run by — who else — Edwards, this time from 23 yards out. A long pass and catch from quarterback Dre Ross to wide receiver Jermario Hersey preceded the run.

Ole Brook got the ball back late in the half and with the aid of some penalties mounted an attempt to tack on one more touchdown before the break.

With 18 seconds remaining in the second quarter Ross, lofted a pass to the corner of the end zone that was reeled in for a spectacular one-handed catch by senior Jontavius Wilkinson.

Trace Brady was a perfect 4-for-4 on PAT kicks in the first half and the huge King Field crowd was rocking to a 28-7 Panther lead.

The second half was more of the same as the BHS defense put the clamps on the South Jones offense. South Jones only gained 185 total yards on the night. Senior defensive linemen Kadarius Wells and Jemiah Henry overwhelmed the SJ offensive front at times with their pursuit of the ball.

“We had a little spunk in the beginning and I thought overall we played well,” said Peavey. “The guys upfront did a great job blocking all night.”

The Panthers travel to Hughes Field in Jackson next week to take on the Jim Hill Tigers (2-6, 1-3).

It’s a Lincoln County battle royal tonight in Region 7-2A action as the West Lincoln Bears (4-4, 1-1) travel to... read more