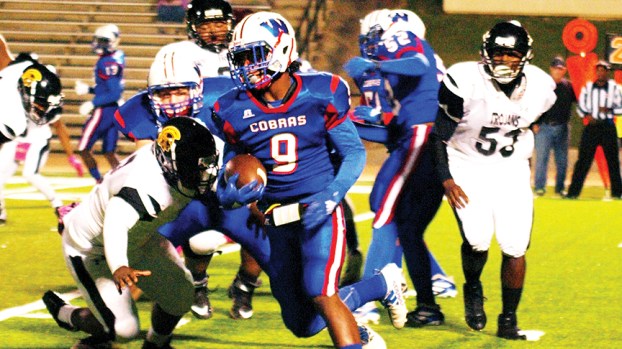 Photo by Tracy Fischer Wesson running back Orlando Smith carries the ball Friday night against Amite County. Smith and the Cobras jumped up 41-0 in the first half as they blew out the Trojans 54-0 Thursday night in Stone Stadium.

The Wesson Cobras (5-4, 3-0) took care of business Thursday night as they hosted the Trojans of Amite County (4-5, 2-1) for senior night in Stone Stadium. In a matchup of two teams that came in with 2-0 division records in Region 7-2A, the Cobras were nothing short of dominant in a 54-0 win.

Wesson wasted no time getting on the board as Anterio Miller received the opening kickoff on the Wesson 11-yard line and returned it 89 yards for a touchdown. Preston Lee tacked on the extra point and with just 15 seconds off the clock the Cobras were ahead 7-0.

The opening kickoff pretty much set the tone for the rest of the game.  Wesson attempted an onside kick, but Amite County recovered it at midfield and took over on offense at the 50-yard line. The Wesson defense then allowed AC to pick up a single yard in forcing a punt.

The Cobras took over on their own 23-yard line for their second drive and on a 3rd-and-short Wesson fumbled and Amite County recovered.

Amite County took over on the Cobra 32-yard line, but again the WAC defense played strong as Jakerio Miller came up big with a sack on 3rd-and-long.

Wesson took over on their own 18-yard line after a punt and used a balanced rushing and passing attack to march down the field. Freshman quarterback Will Loy connected with freshman receiver Chris Davis for a 17-yard touchdown. Lee’s extra point was good and with 4:49 left in the first quarter Wesson was up 14-0.

Again, it was the Cobra defense forcing a punt as they ceded nothing to the Trojans.  Three offensive plays later it was Loy connecting with Miller for a 58-yard touchdown that put Wesson up 21-0.

Things then went from bad to worse for the Trojans following the kickoff. On their first play from scrimmage an Amite County pass was tipped and landed in the hands of Wesson defensive back Antrelle Sims. The speedy Sims took the ball back 45-yards for a score that gave the Cobras a commanding 28-0 first quarter lead.

The second quarter was more of the same. The Cobra defense gave up little while the offense gained large chunks of yardage. Sims got his first receiving touchdown of the night in the period when he caught a 14-yard score from Loy.

Sims wasn’t done though. On the following drive he grabbed his second interception of the night and returned it 49-yards down to the Amite County 31-yard line.

The Cobras came out in the second half and kept the ball on the ground to keep the clock running. Junior running back Jason Edwards scored on a 2-yard dive in the third quarter and Miller ran one in from 5-yards out in the fourth quarter.

“This was good team win for us, we executed well offensively, and our defense was really good all night,” said Cobra coach Jeremy Loy. “This was a huge region win. We just have to stay focused these next two weeks and finish out the division schedule strong.  Proud of my guys for playing a great game and my staff for having a good game plan and having our guys prepared.”

Wesson will travel to Loyd Star next Friday night to take on the Hornets for a 7 p.m. kickoff.

Homecoming 2019 was a real beauty for Brookhaven High fans and alums. The annual production that honors the returning classes... read more