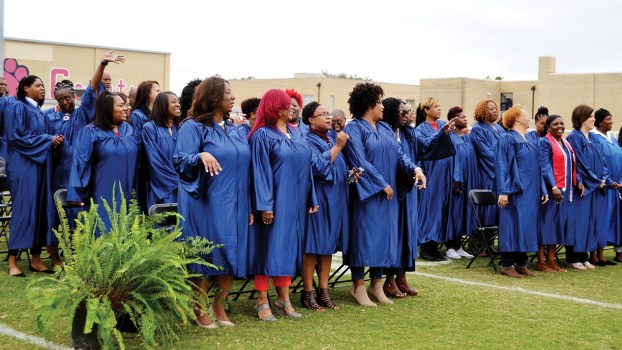 Photo by Aaron Paden Graduates from the Brookhaven High class of 1989 were able to march on King Field Saturday to celebrate their reunion.

It isn’t every day a group of Brookhaven High School graduates return to King Field to re-do their graduation from years past. But the class of 1989 — due to the threat of weather that never came — were denied the graduation they had dreamed of and prepared for.

Parents, children and even grandchildren returned to King Field Saturday, along with over 60 of the 242 graduates for what the reuniting classmates dubbed “Graduation, Take Two.”

“This is the first reunion I’ve been to because I was in the military and I just retired,” valedictorian Mona Tanner Baptiste said. “For most of them, it’s the first time I’ve seen them in 30 years. So, just to re-live those awesome moments — we were a really tight-knit class — it’s just cool to be able to come back.”

Vernell Hooker, a member of the reunion committee that spoke at the graduation, looks back fondly on his time at BHS — a time before cell phones, text messaging and Facebook.

“We viewed high school as a place to learn, but also as a place of fellowship,” he said. “Nobody really missed school, because you didn’t want to miss what was going on at BHS.”

Hooker described the class of ’89 as a class of trend setters and history makers, responsible for the tradition of having a senior parade downtown on the back of a flatbed truck.

“Though we’re not here anymore, we let our light shine very bright,” he said.

Deputy Superintendent Rod Henderson with the Brookhaven School District oversaw the graduation, something he said he was only too happy to do since he knew most of the graduates from his own time in high school.

“Being a member of the class of ’90, I think this shows we were in fact a family,” Henderson said. “(There was) a lot of camaraderie — a lot of togetherness. It shows how much it meant to us seeing each other being successful.”

Dixon’s mother, Alice Dixon, attended the memorial. A Florida flame maple, donated by Dr. Michael Henderson, was planted in Dixon’s memory, along with a memorial stone. Dixon’s family also donated a bench, which was dedicated to Dixon and the class of 1989.

Plenty in store for city businesses

Brookhaven needs healthy businesses to thrive, and local business and real-estate owners are working to keep up with the times... read more