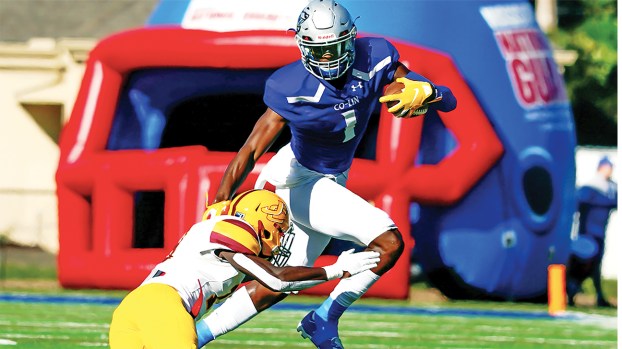 Photo by Co-Lin Sports Information Copiah-Lincoln sophomore receiver Malik Heath hauls in a catch Saturday against Jones. Heath caught eight passes for 79 yards in a 21-14 loss to Jones College. The Wolves conclude their season on Saturday in Summit against Southwest.

The Wolves of Copiah-Lincoln Community College fell to the No. 10-ranked Jones College Bobcats on Saturday in the 2019 homecoming game, 21-14.

The loss drops the Wolves to 3-5 on the year and to 1-4 in MACJC South Division play. Jones improves to 6-2 overall and to 4-1 in division play. Co-Lin wraps up the 2019 season next Saturday,  as the Wolves travel to Summit to face Southwest Mississippi Community College for their homecoming. Kickoff is set for 5 p.m.

The action was slow versus Jones on the first few possessions as both teams’ defenses held strong. Jones followed with an 11-play, 72-yard drive capped off by a seven-yard halfback dive from Kalyn Grandberry. With 6:38 remaining in the first quarter, the Bobcats led 7-0.

Late in the first, the Wolves had a good drive going after holding the Bobcats on a fourth-and-two. The drive stalled at the Jones’ 21-yard line as the clock expired, ending the first quarter. An incomplete pass set the Wolves up for a field attempt, but Jones’ Chei Hill blocked the try and scooped the ball for a 55-yard touchdown return. The score put Jones up, 14-0, early in the second quarter.

The Wolves, led by quarterback Danny Clark, quickly responded with a 13-play, 75-yard drive. The drive saw big plays from Erick Rogers and Malik Heath as the Wolves marched down the field. The drive was stuffed at the Jones’ 13-yard line, but on fourth-and-10, Clark hit Dawson Brown for a diving touchdown. The ensuing point-after attempt was blocked making it 14-6 with 8:54 remaining in the first half.

Co-Lin’s defense held strong on the next possession forcing a quick Bobcat three-and-out. The impressive play forced a punt and gave the Wolves a lot of momentum. Clark capitalized as he once again led the team deep into Jones’ territory. The drive was held-up again in the red zone, this time at the Bobcats’ 16-yard line. On fourth-and-four Clark found Rasaad Sawyer for yet another diving touchdown. The Wolves elected to go for two, and Clark found Heath in the flats to knot the game at 14-14 with just 3:14 to play in the first half.

The third and fourth quarters were defensive battles as the game remained tied at 14-14. Midway through the fourth Jones took over on their own 44-yard line and manufactured a nine-play, 56-yard drive. Ladamian Webb finished the drive off with a five-yard rush for the score. With the PAT the Bobcats led 21-14, a score that would hold until the end.

Co-Lin outgained the Bobcats 327 to 290. Clark led the team with 290 passing yards on 27-of-50 passing. Seven different receivers caught passes, led by sophomore Antoine Robinson, who racked up 89 yards on seven catches. Heath was the main target with eight catches for 79 yards, while Brown and Sawyer scored Co-Lin’s only touchdowns. JJ Jernighan led the rushing attack with 39 yards on six carries. Defensively, the Wolves were led by Xavier Curry who posted a team-best seven tackles, while Jordan Davis wrapped up six. Khehlan Kennedy, Natrone Brooks, Hayden Hill, and Treshon Cooper all had tackles for loss, while Cooper also had an interception.