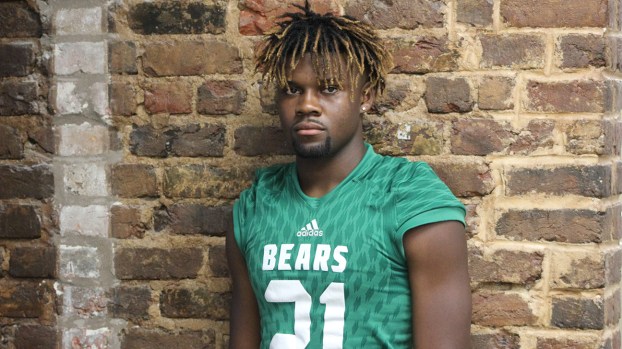 Brothern busts out for 5-TD game, earns Offensive Player of the Week

Does it feel like you’ve been reading about West Lincoln running back Michael “Tez” Brothern for a long time now? Imagine being the defenses of Region 7-2A that have been tasked with stopping him since he came onto the scene as a freshman.

Now a senior, Brothern ran for a season high 250 yards Friday night in a 47-27 win over Loyd Star and for his efforts has been named The Daily Leader Offensive Player of the Week.

He scored five TDs in the win as he carried the ball 18 times and averaged 14 yards per carry. For the season Brothern has run the ball 102 times for 1,090 yards and 19 scores. He’s done all that in eight games after missing the opener against Mize with an injury.

Brothern began carrying the ball for former WL coach Charlie Jackson as a freshman. As a sophomore in 2017 Brothern broke out for 747 yards and four scores as the Bears hosted their first ever playoff game under then-coach B.J. Smithhart. Last season Brothern went over 1,000 yards for the first time as he carried 166 times for 1,044 yards and 13 scores.

Friday night West Lincoln and Loyd Star were in a close game that the Bears led 20-13 at halftime. WL seized momentum with an onside kick to start the second half and used a steady diet of Brothern and his brother Enrico Price to grind down the LS defense.

“You know when the lights are on, he’s going to give you everything he’s got,” said WL coach Brad Bland.

His balance, the ability to stay on his feet while moving forward, is what jumps out the most on a given Brothern run. He’s physical enough to take contact and stay upright, while fast enough to break a long run. Against St. Joseph, he had a run go for 70 yards and with the Bears being a team that doesn’t throw the ball much, big gains by Brothern and Price are a key for the green and white offense.

Also, a linebacker/safety hybrid on defense, Brothern made three tackles including a sack against the Hornets. He’s made 38 total stops thus far this season on defense.

“Mike is a great leader and is well-respected by his teammates,” said Bland. “He likes to make people miss, but he’ll still lower his shoulder and run over defenders like an old school running back.”

The win over Loyd Star puts West Lincoln in position to challenge for second place in the region behind Wesson. The Bears have a huge game this week against Bogue Chitto and then an equally big matchup with Amite County the following week.

Win both and the Bears will lock up the second home playoff game in school history. Last season Amite County beat the Bears 44-14 and Bogue Chitto bested West Lincoln 55-30.

If West Lincoln is going to make history and have their best regular season ever, they’ll need Brothern, the program’s all-time leading rusher, to have two more weeks of big gains.

Wesson junior Antrelle Sims is dynamic with the ball in his hands. His speed and instincts are special to see... read more