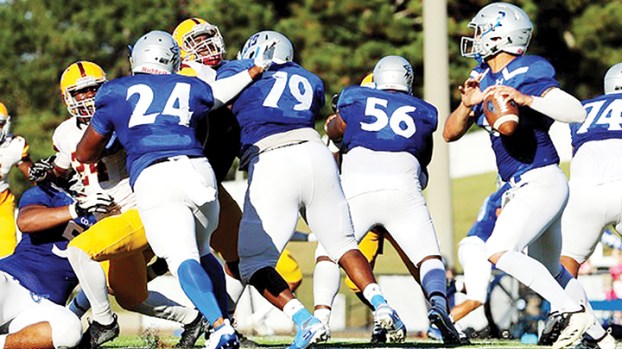 Photo by Co-Lin Sports Information The Wolves enter the game off a tough 21-14 loss to the then-ranked No. 10 Jones College Bobcats last weekend.

Co-Lin closes out season against Southwest

The Wolves of Copiah-Lincoln Community College will attempt to finish out the 2019 season on a high note Saturday as the team travels to Summit to face the Southwest Mississippi Community College Bears for their homecoming matchup. The game is scheduled for a 5 p.m. kickoff at John I. Hurst Stadium. Co-Lin enters the game, 3-5, 1-4, and on a five-game losing skid, while the Bears are still looking for their first win of the season, as they are 0-8, 0-5.

The Wolves enter the game off a tough 21-14 loss to the then-ranked No. 10 Jones College Bobcats last Saturday. Despite the loss, the Wolves had several strong performances. Danny Clark led the team with 290 passing yards on 27-of-51 passing with two scores. Antoine Robinson had another good game at receiver with seven catches for 89 yards, while Malik Heath racked up 79 yards a team-high eight catches. Dawson Brown and Rasaad Sawyer caught the Wolves’ two touchdown passes. Xavier Curry led the team defensively with seven tackles, while Jordan Davis wrapped up six. Treshon Cooper also had a big play with an interception.

Overall, Saturday’s rivalry matchup looks to be exciting as both teams battle it out in an effort to end the season with a solid MACJC South Division victory.

With a forecast that calls for possibly heavy rain moving into Southwest Mississippi on Friday, many area schools have moved... read more