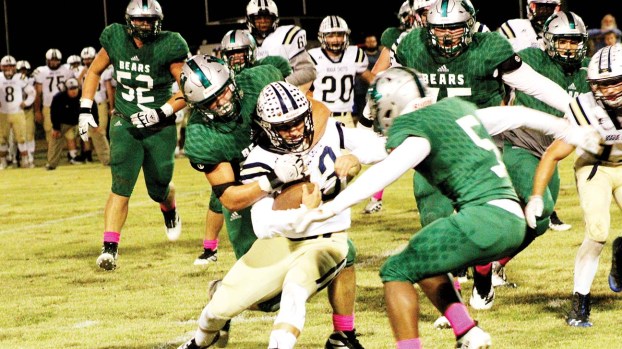 At times it felt like watching a tennis match that was in the middle of a long rally. Back and forth down the field West Lincoln and Bogue Chitto went Thursday night — moving the ball against little resistance, piling up touchdowns and rarely punting.

One could tell early on that the game might come down to the final drive or play and that’s exactly how it shook out. As the horn sounded, a West Lincoln (5-5, 2-2) Hail Mary heave landed on the turf of Perry Miller Field just short of the end zone as the visiting Bobcats from Bogue Chitto (4-6, 2-2) captured a 44-36 win.

Coming into the Region 7-2A matchup ,it appeared the Bears were the favored team. They sat in prime position to lock up the No. 2 seed in the division, if they could beat BC this week and Amite County next week.

The Bobcats, for their part, have rarely had their entire accompaniment of players this season, as various injuries have limited them in every game. With junior J.T. McCaffrey the only key BC player not available Thursday, it felt like coach Gareth Sartin finally had a full deck of cards to deal.

Part of the game resembling a ping pong match early on is the fact that neither team kicks off deep. BC kicker Carson Price usually boots a bouncing kickoff that the opposition recovers somewhere along the 50-yard line. West Lincoln kicker Jacob Lofton often kicks the ball high and short, forcing the receiving team to call for a fair catch just past midfield as the Bears’ coverage runs in.

That means that for the most part, both teams started with good field position on every possession. The Bobcats quickly covered 54 yards on their opening drive as junior running back Owen Anderson broke a big run around the right side to get BC into the red zone.

Bobcat quarterback Shaw King then ran the read option perfectly to score from 20-yards out and put his team up 7-0 less than three minutes into the game.

West Lincoln answered back in less than a minute with a 36-yard Enrico Price touchdown run to tie the game 7-7.

The following BC drive ate up five minutes as Anderson ran in from 10-yards out to put the Bobcats up 14-7, which would be the score after the end of the first quarter.

The next WL scoring drive saw QB Travis Hall connect with Chris Freeman for two big gains, the second one being a 32-yard scoring pass to tie the game at 14-14.

The Bobcats’ next drive nearly stalled out when they faced a 4th-and-6 at midfield. King found Anderson on a roll out to pick up the first down and then later the pair connected again for a 6-yard score to put BC up again, 21-14.

Hall and Freeman continued to work the passing game to move the ball down the field on the next drive for the green and white as the duo connected a 37-yard pickup. Michael Brothern scored from the 1-yard line to make the score 21-21 with 4:10 remaining until halftime.

Just two minutes ticked off the clock before BC hit back, this time on a 10-yard run by Anderson.

Expectations were high for Anderson to have a big junior season after he was such a valuable piece for the Bobcats last year running and catching the ball. An ankle injury has hampered him all season, but Thursday morning he felt like himself again.

“I just woke up this morning and knew I was going to have a good game,” said Anderson. “I felt locked in and knew we had a good game plan if we could execute it and this is the best my ankle has felt all year.”

Part of that game plan was for the Bobcats to run mainly to the right side of their line, behind the offensive line duo of juniors Davis Hart and Mac McKinney and away from WL defensive lineman Grant Jackson.

Anderson finished the night with 206 yards on 18 rushes. He scored three rushing TDs and also caught four passes for 45 yards and a score.

After the Anderson run to put BC up 28-21, the Bobcats changed the score-for-score rhythm of the game by recovering an onside kick that robbed WL of a possession. Price booted a rolling ball that jumped into the air past the Bear return team and was recovered by Bogue Chitto freshman Cameron Williams.

A pass from King to Zach Upkins got BC within the West Lincoln 10-yard line after the kick recovery. With time running down, BC settled for a Price 32-yard field goal at the halftime horn that gave them a 31-21 lead at the break.

On the first play of the third quarter, Brothern raced around the left end for a 64-yard touchdown run to make the score 31-28.

The third quarter saw the teams begin to make plays defensively and slow down the breakneck pace of the game. With 6:50, remaining in the third quarter Justin Pratt of WL booted the first punt of the night for either team.

The Bears drove down to the BC 9-yard line late in the quarter and faced a 4th-and-2. Opting to go for it instead of attempting a field goal to tie, the West Lincoln offense was stopped a yard short of the marker.

West Lincoln then had consecutive turnovers on their following two drives as King intercepted a tipped pass for BC and linebacker Felder Sartin fell on a Bear fumble.

Anderson — again running like his feet were on fire — sped in from 40-yards for the next Bobcat TD. The PAT kick was blocked, and BC led 37-28 with 7:51 remaining in the game.

After the Sartin fumble recovery, King hit Tristan Buffington for an 18-yard score that grew the lead to 44-28 with 2:30 left on the clock.

Coach Brad Bland and his Bears weren’t done fighting though. Hall used a long gain to get the green and white close and then got in on a QB sneak. Brothern went around the end on a reverse for the 2-point conversion and the Bears trailed 44-36 with 51 seconds left.

A penalty on the conversion moved the kickoff up and Lofton’s kick rolled right through the middle of the BC return team. The Bobcats didn’t have time to pounce before Gabe Bush of West Lincoln recovered the ball all the way down on the BC 24-yard line.

Bobcat linebacker Reid Smith shot in to sack Hall on first down and then the Bears picked up a penalty for spiking the ball while in their shotgun formation. Those yards plus the ground lost to the sack effectively killed the final West Lincoln threat.

“Great win tonight for the kids,” said Sartin after a lively Bobcat postgame huddle. “We really battled hard. So many different guys made big plays and the defense really stepped up in the second half when we needed it.”

Wesson leads the division with a 4-0 record. Amite County sits in second place at 3-1. BC and WL are tied with 2-2 records. West Lincoln closes their regular season out next week at Amite County in Liberty. The Cats host Loyd Star next week for the Possum Bowl.

King finished 9-of-18 for 182 yards and two scores for BC. WL quarterback Hall finished 5-of-10 for 125 yards and one score. Hall also rushed five times for 36 yards and a TD. Brothern carried the ball 17 times for 165 yards and two touchdowns. Jacob Thornhill was 4-of-4 on PAT kicks for West Lincoln.

As the conductor of a BC offense, no one is more excited about the Bobcats getting healthy than King.

“It was awesome to have nearly everybody back tonight,” said the senior Shaw after the game. “The offensive line played really well tonight. It feels like we’re coming together as a team before the playoffs.”