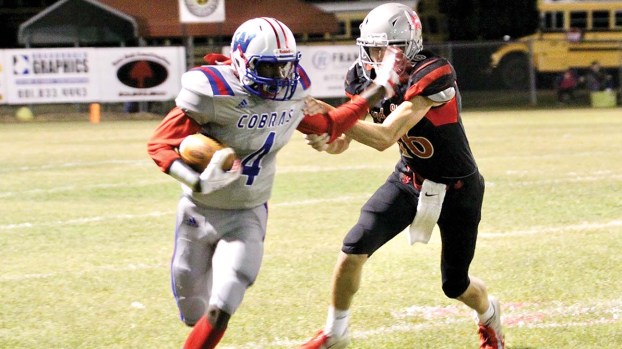 “I’m proud of my guys for playing hard and getting this win that sewed up the region title for us,” said Wesson head coach Jeremy Loy. “We played well on both sides of the ball and we were able to get some young guys on the field in the second half, so they could get some valuable experience.”

Wesson quarterback Will Loy finished 12-of-15 for 269 yards and three scores. Five different Cobras either caught or ran for a score in the win.

Junior Jason Edwards punched in a TD on the ground from the 3-yard line to put Wesson up 6-0 early.

On the ensuing drive, Loyd Star quarterback Stephen Mills connected with receiver Thomas Kelly on a big play that got the Hornets inside the red zone, down to the Cobra 15 yard-line.

The Cobra defense wouldn’t give up much more yardage though, and Loyd Star was forced to attempt a 27-yard field goal that would be no good.

Wesson responded when Loy hooked up with one his main targets — Anterio Miller — for a 75-yard pass and score. Preston Lee’s extra point was good, and Wesson led 13-0.

On the first play of the next drive Mills was intercepted by Edwards. That set up a 15-yard touchdown run by Antrelle Sims out of the wildcat formation, the extra point was no good and the Wesson lead was extended to 19-0 as the first quarter ended.

The second quarter and rest of the game followed a similar pattern as the first quarter.

In the second quarter Loy found Chris Davis for an 18-yard touchdown reception and later in the period hit Sims for a 35-yard TD pass that put the Cobras up 32-0.

On the next drive Loyd Star started moving the ball and got down into Cobra territory as Mills was able to connect with a couple different receivers to pick up good yardage and first downs, but as the Hornets got closer to Cobra end zone the Wesson defense turned it up a notch and stood strong by forcing a turnover on downs.

With just a little over a minute left in the half the Cobras were content in using a rushing attack to run time off the clock and get to halftime. However, on the second play of the drive Orlando Smith broke loose for a 66-yard touchdown run that put Wesson up 39-0 at the break.

After a Loyd Star punt to start the second half Smith broke free again for a 35-yard gain to get the ball into Hornet territory. Two plays later he found the endzone on an 18-yard run. A junior, Smith rushed five times for 146 yards and two scores.

Freshman Tony Sander scored from 15-yards out to cap the Wesson scoring.

For the Hornets Mills finished 4-of-10 for 77 yards. The Cobra defense gave up just 22 yards rushing on the night.

Mills made a team high eight tackles as Wesson piled up 577 combined offensive yards in the game. Scott Hutt led the WAC defense with seven tackles, followed by Jakerio Miller with five and a fumble recovery.

Wesson concludes their regular season Friday at Enterprise while the Hornets head to Bogue Chitto for the Possum Bowl.

The Brookhaven High Panthers (3-5, 2-2) head to Hughes Field in south Jackson tonight to take on the Jim Hill... read more