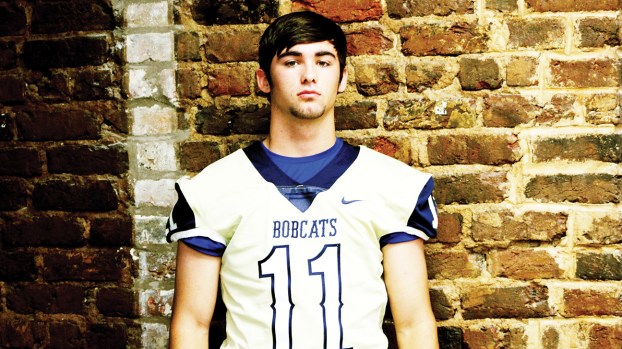 Daily Leader file photo Bogue Chitto’s Owen Anderson said he feels like himself again after recovering from an ankle injury. His performance Thursday night earned him the recognition of Offensive Player of the Week.

Fans from both Bogue Chitto and West Lincoln milled around Perry Miller Field Thursday night after their game went final. Friends and neighbors and folks that share a pew on Sunday — there weren’t too many hard feelings (maybe a few, but not too many) after the Bobcats had just held off the Bears for a 44-36 region win.

A fan wearing green and white hooked a thumb towards No. 11 for Bogue Chitto, junior running back Owen Anderson. “He’s just so smooth,” said the West Lincoln supporter. “You don’t realize how fast he’s going until he’s gone.”

Anderson had just rushed the ball 18 times for 206 yards and three scores. He’d also caught four passes for 45 yards and another touchdown and for his standout performance has been named The Daily Leader Offensive Player of the Week

The smile worn by Anderson after the game let you know how big the game had been to him. To say the 2019 season has been frustrating for the teenager would be an understatement.

As a sophomore on a Bogue Chitto team that had depth at the skill positions, Anderson rushed for a team-high 700 yards on 99 carries. He scored 11 rushing TDs for coach Gareth Sartin while also catching six more scores and piling up 430 receiving yards on 19 catches.

He came into his junior season with the goal of rushing for over 1,000 yards and leading his team back to the playoffs for a third straight season.

Those personal goals were derailed by an ankle injury, though. A sprain and chipped bone have severely limited Anderson this season. Against Amite County, he looked like he might be working back into form, rushing a season-high 11 times for 79 yards in just his third appearance after missing the entire month of September injured.

However, he got banged up again against Wesson and came into the WL game with just 198 yards rushed for this season.

The Bogue Chitto offense is one that usually has pre-snap motion on every play. Wingbacks dip, dive, duck and use misdirection with deception to keep the defense guessing.

On the first drive Anderson took a handoff around the right side of the line and let everyone know that he was back after breaking off a huge run that put Bogue Chitto deep into West Lincoln territory.

The season hasn’t gone as planned, but Anderson and his teammates still have a ton to play for.

They’ll take on Loyd Star in the Possum Bowl Friday for their regular season finale. If the Bobcats beat the Hornets, then they’ll punch their playoff ticket. A win by BC and a West Lincoln victory of more than seven but less than 10 points against Amite County the same night could vault Anderson and the Bobcats all the way into second place.

As he said Thursday night after the game, Anderson is just literally happy to be here.

“It feels so good to be back,” said Anderson after the game. “I didn’t know if I’d make it back, but tonight I felt like myself again.”

Pierce gets after quarterbacks, and gets Defensive POW

Even if he weren’t making plays on the field, Lawrence County defensive end Stefan Pierce would be first team all-warmups.... read more