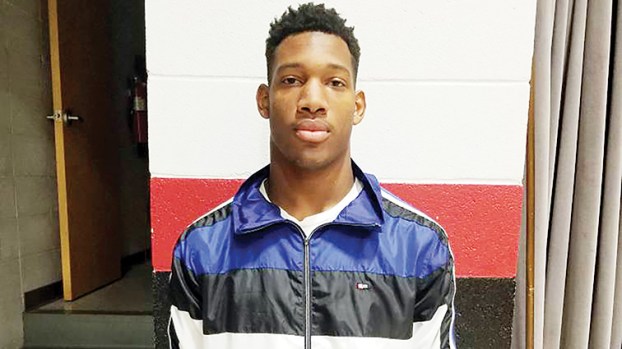 Pierce gets after quarterbacks, and gets Defensive POW

Even if he weren’t making plays on the field, Lawrence County defensive end Stefan Pierce would be first team all-warmups. As soon as he gets off the bus, Pierce makes an impression with his size and build.

He doesn’t just look the part though, he plays it, too. Thursday night in a crucial Region 6-4A matchup, Pierce and the Cougars held off McComb for a 20-13 win in Monticello. He made 13 tackles, four for a loss and had two sacks. For his effort Pierce has been named The Daily Leader Defensive Player of the Week.

McComb junior quarterback Chris Roberson does it all for the Tiger offense. He’s scored a combined 21 touchdowns this season on the ground and through his air. Containing him is the key to beating McComb.

The Tigers got three explosive plays against Lawrence County as Roberson scored on a 40-yard scramble and then hit Jaquaveion Anderson for a 57-yard touchdown pass. The final big play saw Roberson connect for 36-yards with Rod Monley to get McComb inside the LC 10-yard line with second remaining in the game.

Pierce and the Cougar defense stiffened though and defensive tackle Treizjan McClain recovered a fumble to seal the Lawrence County win.

Last season Pierce made 30 tackles as a junior including four sacks.

In 2019 Pierce has stepped his game up a level as he’s made 68 tackles with one game left in the regular season. He’s also made eight sacks and if he doesn’t record the tackle for a loss, there’s a good chance he’s hurrying the quarterback into getting rid of the ball.

Listed at 6-foot-2, 200-pounds — Pierce looks even bigger than that when he’s padded up and positioned on the edge of the defensive line.

When teams try and run away from his side you’ll often see Pierce sprinting down the line of scrimmage to chase down the ball carrier from behind. He’s the type of defensive presence that draws your eye while watching the Cougars play.

His coach says his motor is what makes him special.

“Stefan possesses rare speed for a guy his size,” said LC coach Jesse Anderson. “He can stop the run on one down and then use that speed to get to the quarterback the next down. He has what it takes to play sideline to sideline.”

A win by Lawrence County would have the Cougars hosting a playoff game the next week as the No. 2 seed in the region. It would be a fitting for a loaded senior class that includes Pierce to bring playoff football back to Monticello.

For a fifth straight year the Brookhaven High School cross-country team showed they’re in a class of their own at... read more