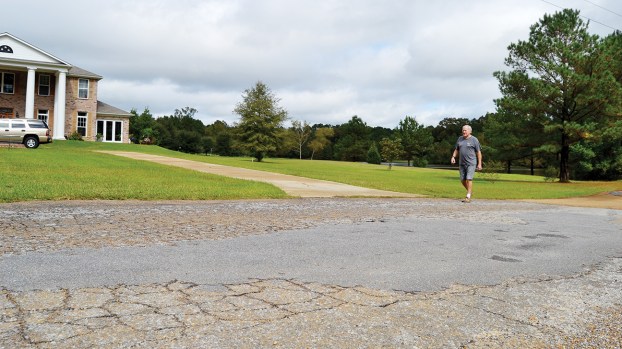 Photo by Aaron Paden Local resident Robert Johnston goes for a walk past his house Wednesday among patches and potholes on Oak Hill Drive.

Lincoln County supervisors recently made the tough decision to refuse a $75,000 grant that would have helped protect Oak Hill Drive from erosion in order to save grants for three other projects.

Supervisors voted 5-0 earlier this month to accept $102,250 from the US Department of Agriculture through its Emergency Watershed Protection Projects. Documents from Wesley Kerr with USDA’s Brookhaven office show awards of $28,500 for Bogue Chitto High School, $35,000 for Lee Street and $38,750 for Glendale Lane to be used to pay for measures to reduce hazards to life and property from floods, drought and the products of excessive runoff or erosion on any watershed impaired by a natural occurrence. The county will put up a 25 percent match on each project.

County engineer Ryan Holmes reminded the board at an Oct. 21 meeting that Kerr needed the signed paperwork for the four projects.

“If we’re not going to do Oak Hill, we need to let them know so they can pull that out,” he said.

The paperwork had to be signed and returned by Oct. 24.

Oak Hill Drive is the subject of a lawsuit by the Oak Hill Homeowners Association, which is seeking to have its roads declared public and be maintained by the city.

The HOA argues its roads are public by prescription, citing the 2006 case Robinson vs. Lincoln County Board of Supervisors in which supervisors successfully added a road to the public register over a landowner’s protests because the county had previously performed maintenance on the road.

Supervisors listed it on Lincoln County’s public road registry in 2003, prior to the city claiming the area in its 2007 annexation, and the HOA has pointed out that the roads have always been open to public use for school buses, garbage trucks, mail carriers and other services.

The City of Brookhaven is arguing the roads remain private property and were never properly dedicated to the county prior to the annexation. The city is unwilling to accept ownership of roads not built to certain standards and wants Oak Hill to repair and upgrade its road system before considering making the roads public.

The battle between Oak Hill and Brookhaven has been fought for a few years. District 4 Supervisor Eddie Brown said he doesn’t see the case being settled anytime soon.

District 3 Supervisor Nolan Williamson made the motion to strike Oak Hill Drive from the awards since the lawsuit hasn’t been settled and accept the other three awards. District 1 Supervisor and President Jerry Wilson offered the second. The motion passed unanimously.

“If we came up with another site, would they reconsider us?” he asked.

Holmes said the awards were based on the USDA’s observations after heavy rains in February.

“That period’s been closed out. They turned in all the eligible projects,” he said. “I asked if we could utilize it somewhere else. I knew that was going to be a question y’all asked.”

Holmes said there could be another opportunity to apply for Oak Hill Drive in the future if there is a substantial rain event.

An approximately $2.9 million project to improve the intersection of U.S. Hwy. 84 and Auburn Road is underway in Lincoln... read more