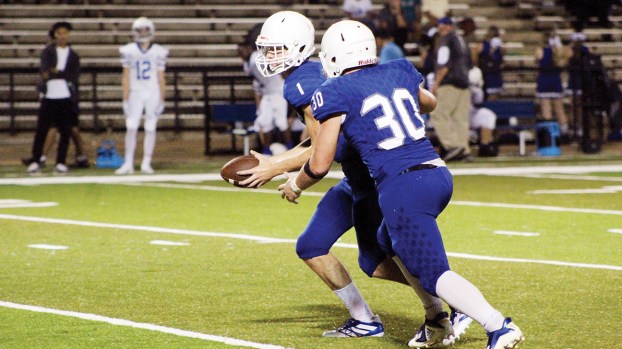 Daily Leader file photo Brookhaven Academy hosts Kirk Academy in the first area playoff game Friday at 7 p.m. A win will move the Cougars on to a second round matchup with second seeded Tri-County Academy.

The Brookhaven Academy Cougars (6-4) are the first area team to enter the postseason as they entertain Kirk Academy (4-6) Friday night on R.M. “Red” Stuard Field.

The game is one of four MAIS 4A first round playoff games being played around the state. The top four seeds in the 12-team bracket received first round byes. The Cougars are the seventh seed in the bracket and Kirk Academy is seeded 10th. The winner will move on to play at second seed Tri-County Academy next week in Flora.

Kirk, located in Grenada, is under the direction of second-year coach Ken Chandler. The program is in the postseason after going 1-9 last season. Kirk is currently in a streak of 11 straight seasons without a winning record.

This season, though, the Raiders have played a difficult slate of opponents. They have losses to Carroll Academy (8-2), Heritage Academy (11-0), Pillow Academy (8-2) and North Delta (7-3).

The best win of the season for Kirk was a 27-26 overtime victory against Winona Christian (8-2).

“There’s no doubt they’ve played a tough schedule this season,” said BA coach Ron Rushing. “They scheme you up well and use a lot of different formations.”

Senior Alex McDurmon is a do-it-all athlete that the Raiders rely on. He’s caught 13 passes for 214 yards and two scores. He’s also rushed 83 times for 368 yards and attempted 16 passes. Junior Parker Goodson has run 108 times for a team high 508 yards and four scores.

BA is battling some late season adversity as junior Caleb Carithers was recently ruled out for the rest of the season with an injury. Carithers is a two-year starter on the offensive line and had played some big downs as a defensive tackle.

Carithers was especially needed on the defensive front after junior lineman Cade Watson was lost earlier in the season to an injury.

“We’ve been working sophomore Carter Smith in at right guard to replace Caleb,” said Rushing. “Sophomore Trenton Tarver has also gotten some reps there this week during practice.”

Expect the Cougars to open their passing game back up after exclusively using their ground attack in the last two weeks — a 41-14 win over Hillcrest and a 10-3 victory at River Oaks.

Kickoff at BA is set for 7 p.m. Friday night.