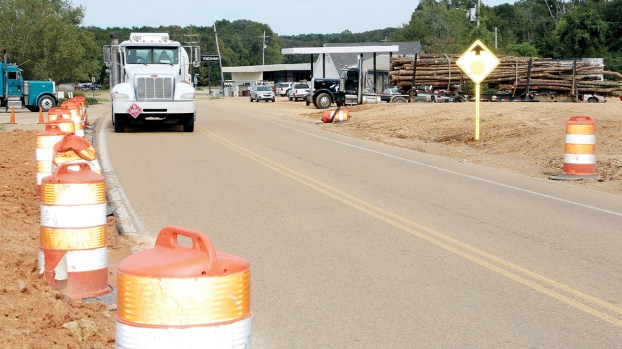 Photo submitted A project to improve the intersection of U.S. Hwy. 84 and Auburn Drive is underway in Lincoln County. Signal poles, traffic signal heads and a turning lane have been added.

An approximately $2.9 million project to improve the intersection of U.S. Hwy. 84 and Auburn Road is underway in Lincoln County.

“A number of wrecks have occurred in this area, and we discovered the location of the current intersection was a contributing factor,” said Melinda McGrath, executive director of the Mississippi Department of Transportation. “This project is geared towards improving motorist safety and decreasing accidents.”

This project was awarded to Midway Construction Inc. of Roxie.

Work began in March and is expected to wrap up early winter, she said.

Dickerson and Bowen Inc. has been working on a $13.5 million overlay project on Hwy. 84 which starts at Bogue Chitto exit on I-55 and stretches 9 miles to the Bogue Chitto River.

Work began May of 2018 and is expected to be completed in late fall. All that is left to do is striping and final mowing, she said.

Dentist collecting candy for a cause

It isn’t the spiders and skeletons, or the eerie glow of the jack-o-lantern that fill parents with dread on Halloween.... read more