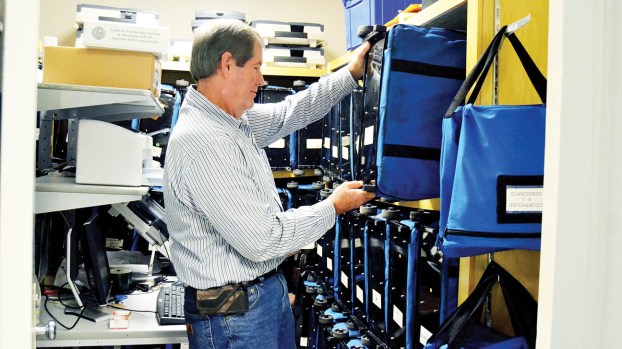 Deciding who will wear the top lawman’s badge in Lawrence County may bring more people to the polls Tuesday than voted in the primary election.

Lawrence County Circuit Clerk Sandy Brister said of the 8,710 registered voters, “just a tad over 50 percent” turned out in August for the primaries. Of those, about 33 percent voted Republican and 17 percent voted Democrat.

Voters aren’t required to pick a party for the general election.

Brister looked at the absentee votes already cast and predicts a higher turnout Tuesday than in August.

“That’s always been a good indicator, the number of absentees. We’re already ahead of the August primaries,” he said.

His office in the Lawrence County Courthouse will be open today from 8 a.m. to 5 p.m. and Saturday from 8 a.m. to noon for voters who need to vote absentee. The deadline to vote by mail is Monday and Brister must receive the absentee ballot in his office by mail by 5 p.m.

Brister, who is unopposed, said the sheriff’s race will pull people in to the polls.

“It’s always a big draw. And there are a couple of district supervisor’s races. It’s pretty contested. It’ll be a big draw,” he said. “The governor and lieutenant governor races on down will be a draw also.”

On the district level, voters will choose between Democrat Rita Wilkinson Goss and Republican Vince Mangold for State House of Representative District 53.

Besides the sheriff’s race, five other county races are still undecided in Lawrence County.

Several races were either decided in the primary election in August or the candidates ran unopposed.

Daylight saving time is almost over. On Sunday, clocks will need to fall back an hour, putting them in line... read more