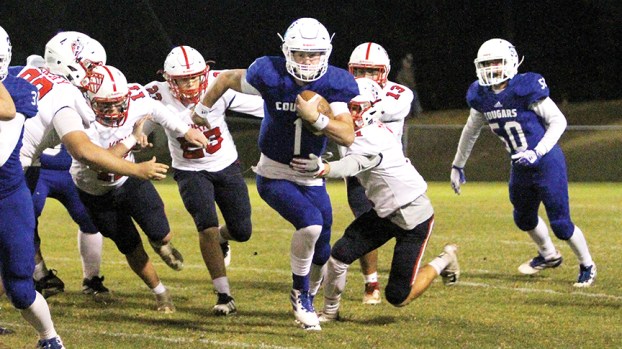 Photo by Sherylyn Evans Sophomore quarterback Tyler Fortenberry picks up yards on the ground Friday night for Brookhaven Academy. The Cougars had no problems with Kirk Academy in their MAIS playoff opener and move on to face Tri-County next week.

Cougars cruise past Kirk into round 2

The Brookhaven Academy Cougars (7-4) got a 62-yard scoring pass on the first play of the game and never looked back as they took care of Kirk Academy (4-7) 27-0 in their MAIS 4A first round playoff matchup Friday night on R.M. “Red” Stuard Field.

Fortenberry also ran for an 11-yard rushing touchdown and hit Collin Waldrop with an 8-yard scoring pass in the first half as the Cougars led 21-0 at the halftime break.

However, the sophomore signal caller took a hard shot in the opening half and was replaced under center by freshman Rayce Stewart in the second half.

BA got their final score of the night in the fourth quarter on a 2-yard run by senior rusher Nick Ogden. Ogden ran for 75 yards on 17 carries. Sophomore John Rivers Brown carried 11 times for 57 yards and Fortenberry picked up 53 yards on nine carries.

BA moves to the second round where they’ll face Tri-County (8-2) next week in Flora. The Rebels are the second seed in the 4A bracket with their only losses coming to top seed Riverfield (50-49) and 5A Hartfield (27-20).