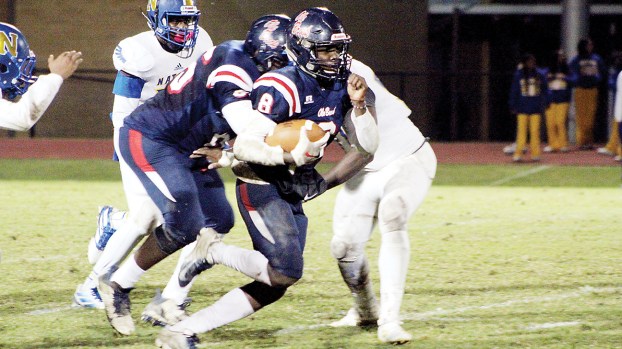 Brookhaven jumped up 21-0 early in the second quarter before the Natchez offense came alive to cut the lead to two scores at halftime, 27-14.

In the first half, BHS got a rushing touchdown from senior JQ Edwards and another short scoring run from sophomore quarterback Dre Ross. Ross also went to the air as he tossed scores to senior receivers Jontavius Wilkinson and Jermario Hersey in the first half.

Natchez received the second half kickoff and wasted no time pulling to within a single score. On the first play of the half Natchez QB James Singleton hit freshman receiver Mike Williams to get his team down to the BHS 15-yard line.  Singleton then sprinted around the left side on the next play to get six points for the Bulldogs. The conversion attempt was no good and BHS led 27-20.

Singleton is 6-foot-5 and is blessed with a very, very strong arm. Also, a basketball standout, Singleton moves like someone is holding the turbo button down when he runs.

The Panthers answered with a Byrion Robinson run that showcased everything the talented and gritty senior does best. Sweeping around the right side of the line Robinson dropped the ball and picked it up off the bounce. A Natchez defender had him dead-to-rights with a grasp on his neck, but Robinson ran through the tackle and then smashed past two more defenders just before the goal line to score and put his team up 34-20 with 5:47 remaining in the third quarter.

That score was set up by a fumble recovery by Dezmon Showers.

Natchez came back in less than two minutes to answer as Singleton bombed another long throw that Williams caught for a spectacular score. Natchez picked up the two-point conversion to cut the lead to 34-28 with four minutes remaining in the third quarter.

The game turned ugly just before the end of the period. Edwards was tackled and didn’t take kindly to a Natchez defender spearing him late. The senior was visibly frustrated and pushed a Natchez player. A fracas ensued, and Edwards was disqualified from the game for throwing a punch.

On the first play of the fourth quarter Ross sprinted up the middle for a 3-yard run that put BHS up 41-26.

The final Natchez TD came with 3:11 remaining in the game when a Bulldog defender stripped the ball and ran it back for score. BHS denied the two-point conversion attempt to keep their lead a two-score margin.

Ole Brook recovered the onside kick and then got a 37-yard touchdown run from Robinson to ice the win. Trace Brady booted the PAT kick to give the Panthers their final margin as the Panther defense led by defensive end Kadarius Wells slammed the door on the final NHS drive.

Robinson finished with 147 yards rushing and Edwards ended with 155 yards on the ground. The BHS offensive line of junior Jon Allbritton, sophomores Omarion Diggs, Rashad Smith, Zerian Hudson and freshman Landon Smith were dominate at the point of attack all night.

The Panthers now turn their attention to Forest Hill. A win next Friday against the Patriots (5-5, 4-2) will give BHS the third seed in the region while the loser finishes in fourth place. Forest Hill beat South Jones 48-32 Friday night.

BHS will most likely have to get the win without Edwards — their leading rusher — as he serves an automatic suspension for his ejection. Junior Vincent Brown worked in the backfield with Robinson after Edwards went out.

“I hate it for the kids and hate it for their teammates, but you’ve got to learn from it and move on,” said BHS head coach Tucker Peavey. “We came out in the second half and didn’t play disciplined, but I thought as a team we responded well to that adversity to get the win.”

The Possum Bowl trophy returns to its perch in the Bogue Chitto field house after the Bobcats (5-6, 3-2) took... read more