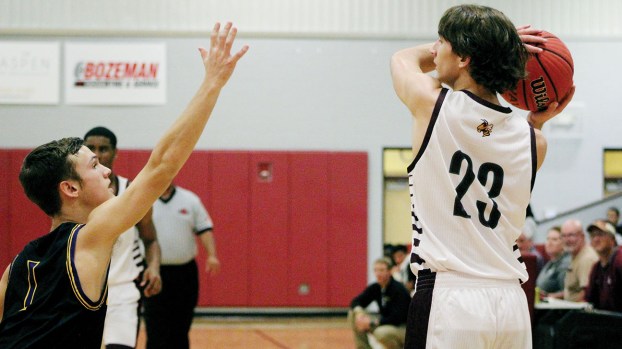 Photo by Cliff Furr Enterprise senior Austin Fugler readies to face the basket Thursday night for the Yellow Jackets against Purvis. The Jackets travel to Salem on Tuesday.

As a team that doesn’t have a true post presence, the Enterprise Yellow Jackets (0-2) must shoot the ball well from the outside in order to win games this season.

That didn’t happen for the Jackets Thursday night in their home debut as a they finished the night shooting just 25% from the floor in a 39-19 loss to Purvis (2-0).

The Tornados had a size advantage inside with a pair of lanky 6-foot-3 seniors in Montero Ray and Trell Camp. The pair only combined to score eight points, but their offensive rebounding gave Purvis second chance opportunities all night.

Sophomore Taylor Presley is usually the tallest Jacket on the floor for Enterprise, but he battled foul trouble all game and went to the bench just 30 seconds into the third quarter after picking up his third foul.

Presley, Austin Fugler and Hibb Johnson all missed short or open shots early as the Jackets were keeping the game close despite their offensive woes.

Fugler and his outside shot were a big part of the Enterprise offense last season. The athletic senior southpaw signed a baseball scholarship with Hinds earlier in the week and averaged 8.3 points per game last season in his first year of varsity basketball. He is the only senior on the team for the Jackets this season.

Johnson is a junior point guard that drives the Jacket offense. He was a Daily Leader All-Area selection last season after averaging 8.8 points, 3.5 rebounds and 3.8 assists per game. Thursday Johnson often found himself taking one dribble too many and ending up with few options when the Purvis defense collapsed near the basket.

The Tornados led 18-6 at halftime. Purvis put the game away in the second half by extending their defense out and getting transitions layups off steals. Enterprise committed 25 turnovers in the loss.

“We’ve got to be a team that rebounds together, and we didn’t do that,” said EAC head coach Shane Adams. “It’s frustrating because you see us miss shots tonight that we knock down in practice. We kept it close defensively for a while, but we didn’t score enough to close the gap.”