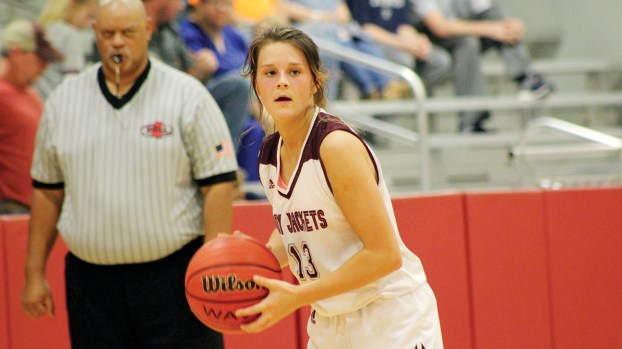 Photo by Cliff Furr Sophomore Ashlyn Bland controls the ball for Enterprise Thursday night at home. Bland grabbed a team high four rebounds for the Lady Jackets in their loss to Purvis.

Lady Jackets outmanned by 4A Purvis

Even at full strength, the Enterprise Lady Yellow Jackets (0-3) would have their hands full with 4A Purvis on Thursday night. The Lady Tornados were 19-10 last season and didn’t have a senior on their team. The larger, more experienced Purvis team was dominant in a 62-14 win over an EAC squad that was shorthanded.

Last season when Enterprise coach Shane Adams needed a bucket he counted on a pair of seniors — Britany Barnett and Breyauna Johnson — to get his team a basket. With those two graduated the hope was that role would be filled by the only two seniors on this year’s team — Belle Porter and Marlee Gunnell.

That couldn’t happen Thursday though as both were in street clothes on the bench. Porter with a splint on an injured finger and Gunnell still recovering from a knee injury that will most likely keep her out until close to Christmas. Sophomore Kana Feltus has also been sidelined by a knee injury suffered this season.

EAC suffered a 10-point loss at Raleigh in their opener and a 14-point defeat at Pisgah earlier in the week. Making their home debut the team battled the nerves that can come with playing in your own gym for the first time.

Enterprise freshman point guard Hannah Jergins is experienced after seeing time at the position as an eighth grader last season. Junior forward Molly Thompson and sophomore forward Alexandra McGee give the Lady Jackets size inside. Sophomore Natalie Harris is the leading returning scorer after averaging 5.9 points per game last season as a freshman for EAC.

“Youth can’t be an excuse for not executing,” said Adams. “We’ve got to find a way to score. We had too many possessions that ended without a shot. Some of that was Purvis causing turnovers, but we had too many unforced errors.”

The Lady Jackets finished 5-of-43 from the field and had 24 turnovers.

Enterprise will return the game with a trip to Purvis on Nov. 19.

As a team that doesn’t have a true post presence, the Enterprise Yellow Jackets (0-2) must shoot the ball well... read more