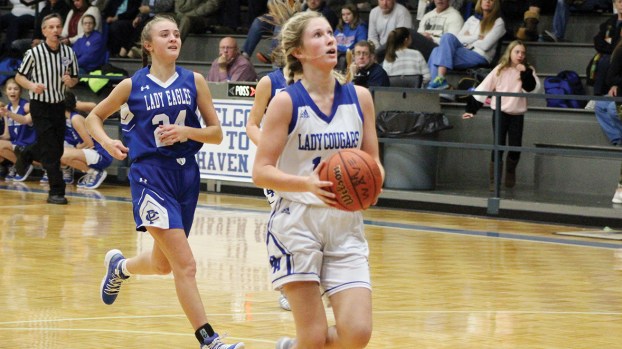 A running clock was used for much of the second half Tuesday as the Brookhaven Academy Lady Cougars routed the Porter’s Chapel Lady Eagles 58-4 in John R. Gray Gymnasium.

One player who wasn’t available was sophomore guard Anne Brantley Warren. An All-Area point guard as a freshman, Warren took a spill Saturday at Simpson Academy during which her head violently bounced of the gym floor. She was cleared to return to practice Tuesday and Kessler was guarded about her chances of playing Friday at Newton County.

She wasn’t needed against PCA though as the Lady Cougars shot layups most of the night against the much smaller team from Vicksburg.

BA will be bigger than many teams in the post this season as they have legit depth at their forwards positions. Sophomore Emily Claire Felder returns after being one of the leading scorers and rebounders for a team that finished as MAIS AA runners-up last season.

Felder has now been joined in the front court by Hallie Creel, who is suiting up as a senior after finishing a standout softball career. Creel will sign with Mississippi College softball later this week and didn’t play basketball last season.

She’s not the only softball player to hit the hardwood this season as sophomores Abby Grace Richardson and Bailee Goodson are also new to the team after previously only playing softball.

Creel and guard Olivia Lewis make up the senior class on the team while there are a pair of juniors on the squad in Makayla Martin and Allison Covington. The sophomore class includes Goodson, Felder, Richardson, Warren, Madison Moak, Mallory Nations and Anna Caroline Adams.

Freshmen Lillie and Emma Gates round out the roster. Tuesday the Gates twins made an impact in the post blocking shots and grabbing rebounds. Paired alongside Felder and Creel they give Kessler a mix of tall options to use inside.

The win moved BA to 3-2 on the season. Saturday at Simpson they lost 68-66 in overtime to a team that also resides in the new MAIS 4A classification. They’ll meet again next Thursday at BA.

The other loss for the Lady Cougars this season was a 68-57 defeat to Parklane, also in overtime. Kessler says his team did itself no favors in those losses.

“We had a combined 51 turnovers in those games and missed way too many free throws as well,” said Kessler. “We’ve beaten ourselves and that’s made taking care of the basketball our number one priority.”

Former Crystal Springs and Wesson coach Hugh Webb is working alongside Kessler as his assistant this season.

Moak led the way with 12 points and six rebounds Tuesday while Martin added seven points and five boards. Both are quick players who are good at putting the ball on the floor and expected to be lead scorers for BA at the guard positions.

“This group really loves each other and gets along great,” said Kessler. “We’ve got to be a little bit better at sharing the ball, coming down on a 2-on-1 or a 3-on-2 and making the right read of who it should go to, but that’s something we’re working on and I think we’ll improve as the season goes on.”

BA will travel to Newton Friday before going to Amite School Center on Monday. They’ll then host Simpson before playing at Copiah Academy on Nov. 21. The week of Thanksgiving they’ll host a tournament that has them playing Columbia Academy Monday night and Bowling Green on Tuesday.