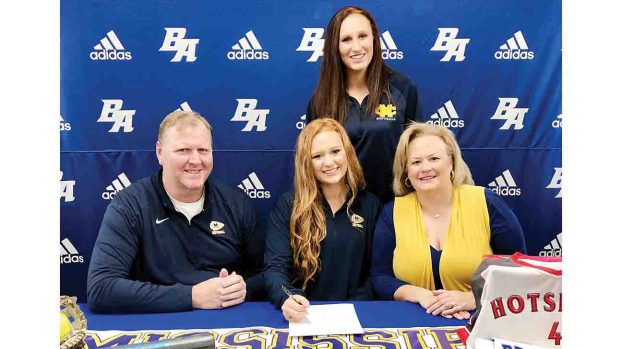 BA’s Creel keeps it in the family, inks with MC softball

Brookhaven Academy senior softball infielder Hallie Creel is going to play for a program she’s very familiar with after signing a letter-of-intent last week with the Mississippi College Lady Choctaws.

In Clinton Creel will join her older sister Hannah, a sophomore pitcher who prepped at Bowling Green before joining MC. As a freshman Hannah went 17-6 in 30 appearances with 122 strikeouts against 674 batters faced. She had a 2.34 ERA for a 40-16 team that made the NCAA regionals as a Division II program.

The younger Creel has been rock-solid in the field and the plate for BA over the past two seasons, a time period when the Lady Cougars posted a combined record of 67-13-2.

As a senior this season, Hallie Creel led the team with 47 RBIs while batting .462 with eight doubles, two triples and four home runs for coach Becky Flowers. Creel also had a sharp eye at the dish as she drew a team-high 21 walks.

Able to play either of the corner infield spots, Creel was a valuable defensive piece that Flowers moved around to wherever she was most needed. She posted a .936 fielding percentage and was part of seven double plays. Creel was an MAIS All-Star game selection as well. Standing 6-foot tall, she is currently also playing basketball for the Lady Cougars.

“Hallie has been a great leader and a constant competitor on our team,” said Flowers. “She was very solid at first base and batter over .450 as a very disciplined four-hole hitter. She’s definitely a coach’s type player with her work ethic and attitude.”

Flowers could always count on Creel to have the right mental outlook — especially in high pressure situations.

“She’s the player that was always positive and upbeat in the tensest moments,” said Flowers. “I can’t wait to see the path God has for her in softball and in life.”

The University of West Florida — a member of the same conference as MC — was a front-runner for Creel as well, but ultimately the chance to team up with her sister was too good to pass up.

“Signing with MC allows me to continue my education and it’s a school that’s known for great academics,” said Creel. “I also look forward to playing with Hannah at the collegiate level and competing for championships.”