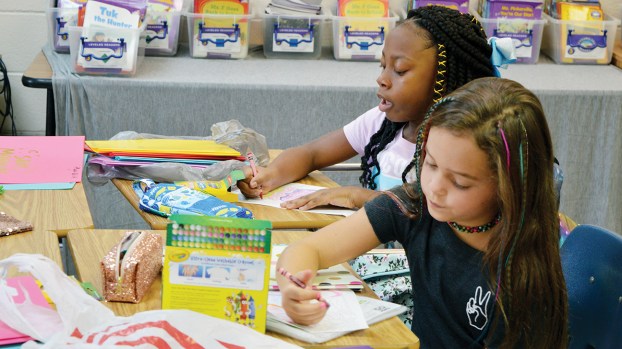 Each of Lincoln County’s state representatives attended the Lincoln County School District’s Board of Trustees meeting Monday to discuss their legislative agenda for education, followed by a question and answer session.

“Some of the teachers, since I’ve been sitting on the board, have left the teaching profession specifically because of state testing,” Laird said. “The stresses involved in that … It’s not healthy. Is there any talk of doing away with that a little bit?”

“I think we all agree the ACT would be a more suitable test,” Currie said. “I think the Department of Education has agreed that the history test has got to go.”

Laird agreed that the ACT would be a better option for students.

“Let’s say (my daughter) does really well and she gets a 32 on the thing,” Laird said. “Awesome. You’ve got a scholarship out of that. Whereas if she’s testing a level five on the state test, what does that do for her?”

Doty said that the ACT has been considered before, but there were federal issues that prevented the bill from moving forward.

At the center of the conflict over state testing is the tension between state legislators and the Mississippi Department of Education. Currie said in the meeting that she has authored a bill to reduce the salary of Mississippi State Superintendent of Education Carey Wright, who is the highest paid state superintendent in the nation.

“I’ve written that bill,” Currie said. “Not that she would not be able to get her salary if she achieves her goals, but she has no goals and she achieves the largest salary in the nation. And for Mississippi — the poorest state in the nation — it’s just ridiculous.”

Doty also said in the meeting that she believes the state’s accountability model needs work.

Mangold reiterated in the meeting that the focus for education is moving more and more toward better work force training.

“That’s going to be a big push,” Mangold said. “It’s a lot of folks that want to see that happen.”

In addition to academics, Lincoln County Superintendent Mickey Myers noted in his monthly superintendent report that they would be pursuing information about vaping monitors for school restrooms.

“I could say a lot about that, but we’ll reserve comment until later… It’s sadly something that we need to consider,” he said.

Currie noted in the meeting that she was embarrassed to find out that the fine for selling tobacco products to a minor was only $50 in Mississippi, and she has drafted legislation for harsher penalties.

“The bill I have written is that they’ll have a $5,000 fine,” she said. “But on their third offense, they will lose their ability to sell tobacco or vaping products at all. We’ve got to make a deterrent. It’s obviously too easy for young people to get a hold of this, and it’s a very deep health hazard.”

• The board accepted the resignation of Custodian Roger Terrell.

• The board added Jennifer Johnson to the substitute teacher list.

• The board gave teachers permission to take their classes to the Global Wildlife Center in Folsom, Louisiana Nov. 22.

• The board gave first grade teachers permission to take their classes on a field trip to the Louisiana Children’s Discovery Center in Hammond, Louisiana, Dec. 6.

• The board added Rusti Rippy to the substitute teacher list.

• The board gave Coach Brian Ford permission to attend the Athletic Directors Conference Jan. 14-17 in Biloxi. The meeting will require travel and overnight lodging.

• The board added Tambira Brothern as a part time janitor for the 2019-2020 school year.

• The board accepted a $661.95 donation from the West Lincoln Booster Club to be used to pay for the 2019 cross-country mileage.

• The board gave permission for Myers and Assistant Superintendent Richelle Ratcliff to attend the 2020 Mississippi Association of School Superintendents Winter Conference.

• The board gave permission for Jeremy Berry and Shirley Price to attend Mississippi School Nutrition Association Executive Board, Advisory Board and Steering Committee meetings in Tupelo Jan. 22-24. The meeting will require travel and overnight lodging.

Supervisors, others to attend training sessions

A newly-elected addition to the Lincoln County Board of Supervisors will get two days of education before he’s even sworn... read more