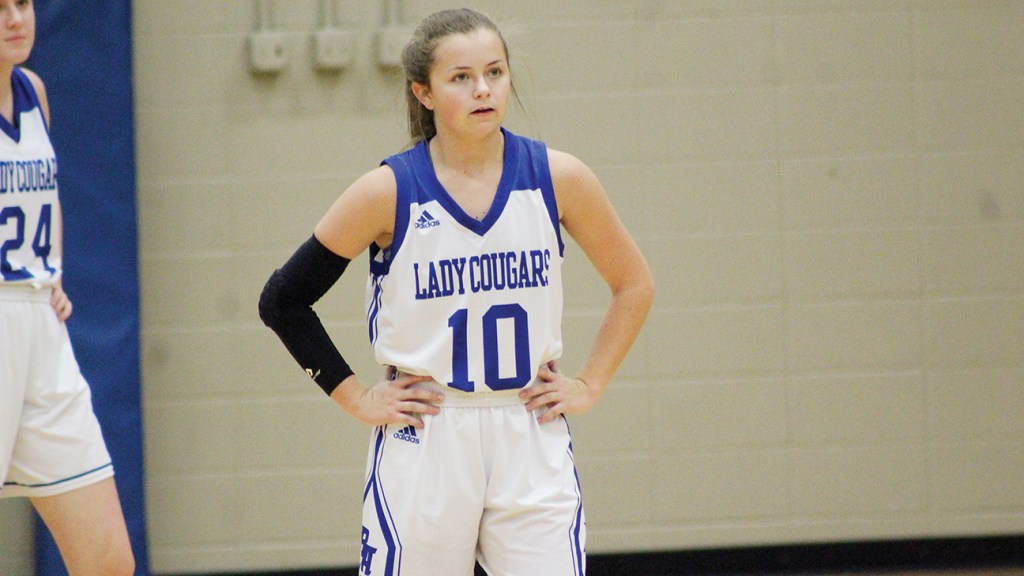 Photo by Cliff Furr Senior guard Olivia Lewis and her Lady Cougars will take on Columbia Academy and Bowling Green in their two night Thanksgiving tournament next week. Lawrence County is also hosting its annual two day tournament Monday and Tuesday of next week.

The gyms at Brookhaven Academy and Lawrence County will be full of squeaking shoes, chirping whistles and fans who prefer nachos and cheese as a turkey day appetizer next week.

Both schools are hosting high school basketball tournaments Monday and Tuesday. It’s the second year for BA to have the event at this time after transitioning from their longtime Christmas tourney. The LC tournament has been running strong for many years and usually features many of the same schools from year to year.

Monday at BA begins with a noon matchup between the Jackson Academy girls and Bowling Green. The Bowling Green boys will then play Adams County Christian at 1:30 p.m.

The ACCS girls hit the court at 3 p.m. to face Parklane. The 4:30 p.m. matchup has Columbia Academy facing Jackson Academy in a boys’ game.

The homestanding BA girls will play Columbia at 6 p.m. followed by their boys taking on Parklane at 7:30 p.m.

The Tuesday schedule starts with Jackson Academy playing ACCS in a girls’ game at noon. That’s followed by the JA boys playing ACCS. The 3 p.m. and 4:30 p.m. games are between Columbia and Parklane with the girls starting things off first.

BA concludes the event by playing the Bowling Green girls at 6 p.m. and boys at 7:30 p.m.

The games in Monticello have a 10 a.m. start with the Terry girls facing Wayne County in the opener Monday. Those two schools will then play in a boys’ game at 11:30 a.m.

The next pairing is Bay High versus Tylertown with the girls playing at 1 p.m. and followed by the boys at 2:30 p.m.

Brookhaven High will then take on Crystal Springs with the ladies playing at 4 p.m. followed by the gentlemen at 5:30 p.m.

The homestanding Cougars cap things off with 7 p.m. and 8:30 p.m. matchups against East Marion.

Day two at LC begins with the Tylertown girls playing East Marion at 10 a.m. Tuesday followed by the boys’ teams meeting at 1:30 p.m.

Crystal Springs and Jefferson Davis County meet at 1 p.m. in a girls’ game that will precede their boys playing.

BHS tackles 6A Terry in a pair of games beginning at 4 p.m. with the boys’ contest scheduled to begin at 5:30 p.m.

The finale will see Lawrence County taking on Wayne County. The girls’ game starts at 7 p.m. and is followed by the boys’ tilt at 8:30 p.m.