Cobras get past Panthers with shootout win 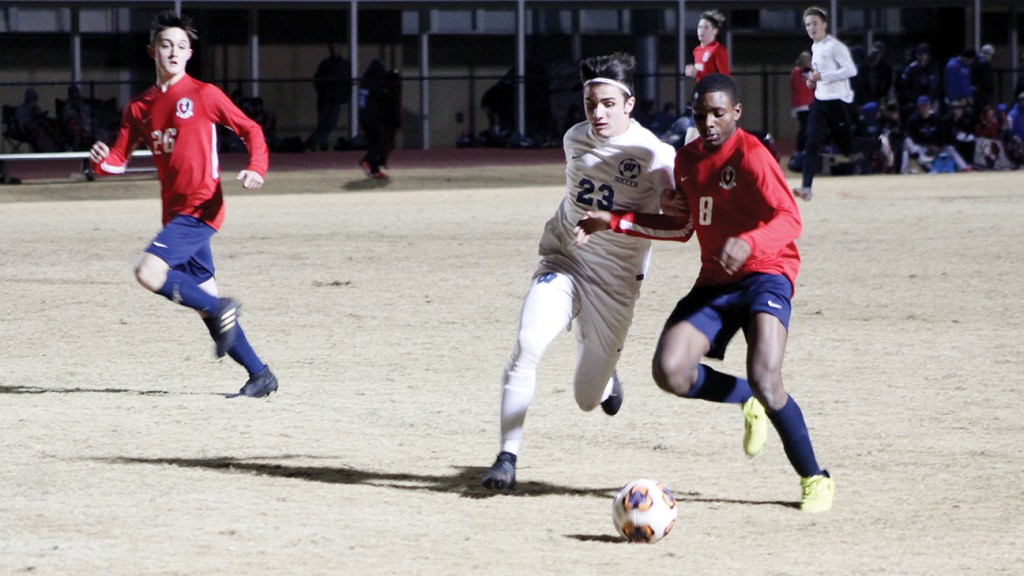 Photo by Cliff Furr Conner Diamond of Wesson and Christian Peyton of Brookhaven High battle for possession Friday night on King Field. After a 0-0 tie in regulation the Cobras were able to squeeze past BHS with 2-1 effort in penalty kicks.

A Cooper Brinson shootout goal gave the Wesson Cobras a 2-1 advantage and a win over Brookhaven High Tuesday night on King Field in boys’ soccer action.

The match was tied 0-0 after regulation and per a coach’s agreement the teams went straight to a shootout and forsook any extra overtime periods. The teams played to a 0-0 tie in their first meeting on Nov. 11 at Wesson. On that night the tie stood, and no overtime or shootout took place.

“We’ve had times this year where we’ll face teams that are physically bigger and older than us and our guys get intimidated by that,” said Ayers. “They’re learning not to back down though. One good thing about this younger group is they’ve got a lot of experience playing together in travel season.”

Jack Bower, Rylan Fortado and Trace Brady are the only juniors on a BHS team that has no seniors. Addison Brady, Bennet Jones, Bryce Bradley and Christian Peyton are sophomores and Cole Cruthirds and Maddox Linton are the only freshmen on the team. The rest of the BHS squad is made up of nine eighth graders and seven seventh graders.

Wesson got its first shootout goal from senior Aaron Mooney. The win moves Wesson’s record to 3-4-3. Last season Wesson finished 10-9 under coach Bobo Douglas and were knocked out 1-0 by Forest in the first round of the MHSAA 1A/2A/3A playoffs.

Mooney has three goals on the season for Wesson and junior Conner Diamond has scored a team high four times.

Most of the game in the second half was played on the Brookhaven side of the field as Wesson controlled the ball. BHS goal keeper Bryce Smith made saves of every variety — running out to punch balls away, sliding low to stop shots and jumping to deflect high shots.  An eighth grader, Smith was a starter last season as a seventh grader for the Panthers.

Wesson senior keeper Zach Franklin saw fewer shots than his counterpart but was equally strong in his play.

The Cobras were coming off a 2-1 loss on Monday to West Lincoln. Diamond scored the lone goal for Wesson in defeat.

“We only had four seniors last year, but they were important to our team,” said Douglas. “We’re still improving and learning to play together with this group.”

The loss to West Lincoln was a region setback for Wesson. They’ll play at North Pike tonight before hosting West Lincoln on December 9. Bogue Chitto, Hazlehurst, Franklin County and Loyd Star are also in the same region as the Cobras and Bears.

Brookhaven High is still in Region 6-5A with Wingfield, Forest Hill and Natchez. The Panthers play at Lawrence County Friday. They beat the Cougars 5-2 Nov. 19 on King Field. They’ll open region play on Dec. 17 with a trip to Natchez.