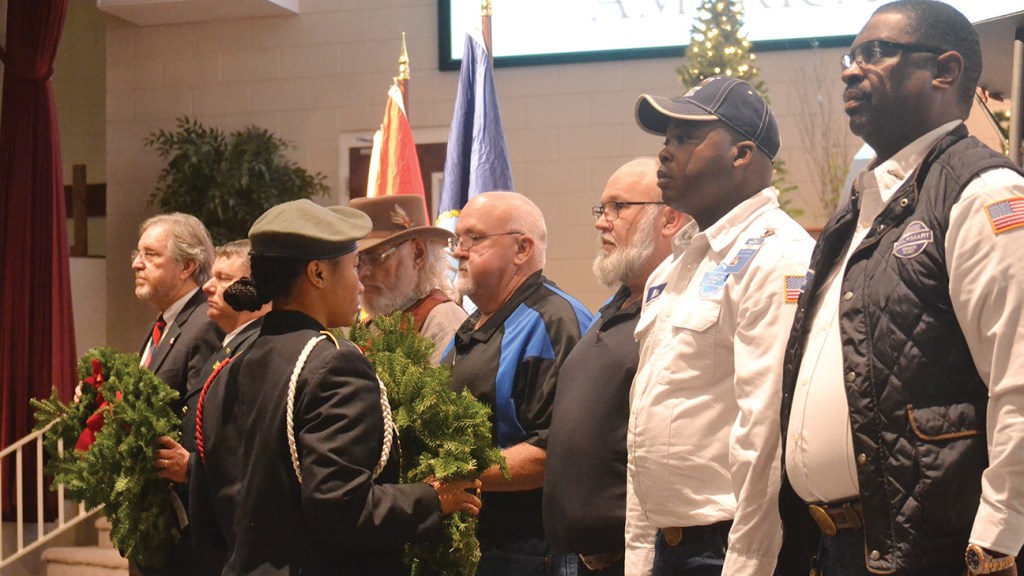 Daily Leader file photo The public is encouraged to attend a wreath-passing ceremony Thursday at 10 a.m. at Easthaven Baptist Church as part of the national Wreaths Across America project. Volunteers are needed for a wreath-laying ceremony at Riverwood Memorial Park Dec. 14 at 11 a.m.

Thousands of wreaths of green balsam assembled in Maine, each hand-tied with a red velvet bow, will roll into Brookhaven Thursday as they make their way across America.

The live Christmas wreaths come loaded on Walmart trucks and each represents a fallen member of the armed services.

Area veterans, their families and anyone with a patriotic spirit are encouraged to attend a wreath-passing ceremony 10 a.m. at Easthaven Baptist Church as part of the national Wreaths Across America project.

Coordinator Terrance Turner, a Walmart Distribution Center transportation manager who served in the armed forces for six years, puts the ceremony together each year as a tribute to the veterans who are no longer with us.

The public is always encouraged to attend, and the Army veteran hopes the event will draw a larger crowd in coming years. The program begins promptly at 10 a.m. so Turner asks that everyone is seated by 9:40 a.m. Lunch will be provided by Riverwood Family after the ceremony.

This is the third year Riverwood has prepared a meal for the guests at the wreath-passing ceremony, however, it will be the first year Riverwood Memorial Park will be a location provider for Wreaths Across America. A wreath-laying ceremony will be held Dec. 14 at 11 a.m. at the cemetery next to the funeral home at 76 Hwy. 51 South.

“We love serving our community and this is just another way to minister to another group of individuals who have done so much for us,” said Riverwood co-owner Colby McMorris.

Wreaths Across America began in 1992, and has developed into the country’s largest military parade. It is designed to honor the memories of slain service men and women and educate the next generation about military sacrifice.

Walmart trucks loaded with live wreaths depart from the Worcester Wreath Co. in Harrington, Maine, every December and crisscross the nation, delivering yuletide cargo along the way. Preparations for the Brookhaven ceremony start in November, and Turner’s team works diligently to pull together the program’s final touches.

Brookhaven has participated in the ceremony for the past 12 years.

From Brookhaven, the trucks — escorted by the Patriot Guard and the Mississippi Highway Patrol — will split up and some will go to Natchez and to Amite, Louisiana, to be distributed in ceremonies at cemeteries there. Some wreaths remain in Lincoln County to be distributed to volunteers who place them at veterans’ graves in the area. Besides Riverwood, wreath-laying ceremonies will also take place in Wesson, Georgetown and Monticello, said location coordinator Greg Marlow, who is commander of the Capt. Daniel D. Entrican VFW Post 2618. The post will assist Riverwood “to remember and honor veterans by laying remembrance wreaths on the graves of the country’s fallen heroes,” he said. “It’s to remember the fallen, to honor those who serve and to teach the next generation the value of freedom.”

Volunteers are needed for the ceremony at Riverwood to lay the wreaths on the graves while saying the name of the veteran. “This ensures that the legacy of duty, service and sacrifice of that veteran is never forgotten,” Marlow said.

Those who want to volunteer should sign in at a table near the cemetery entrance to receive instructions.

The ceremony will be brief, with the Pledge of Allegiance, the national anthem, taps and a moment of silence for the 22 veterans who commit suicide each day, Marlow said.