Tour of Jesus’ life is more than just a Nativity 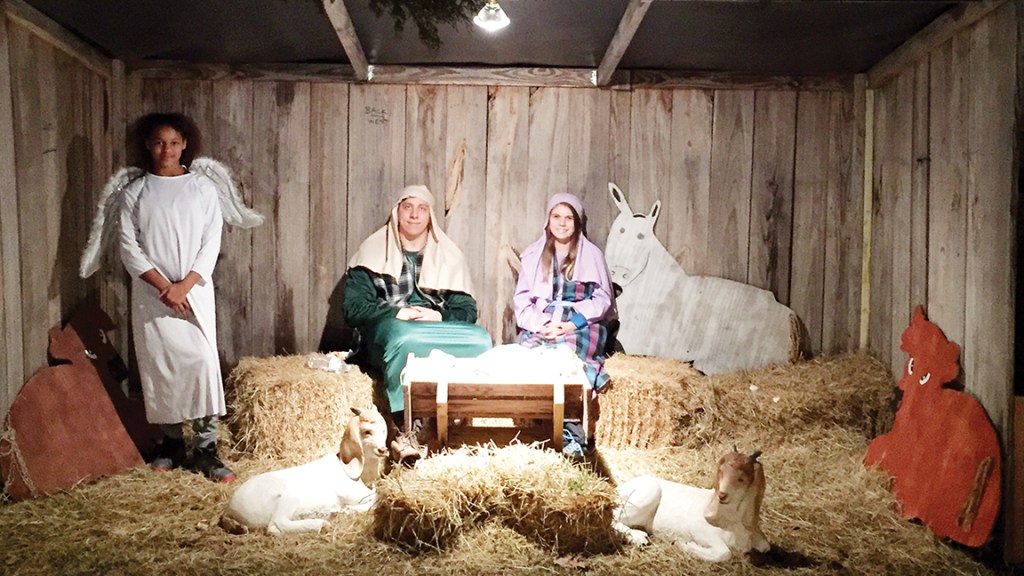 Photo submitted New Sight Baptist Church added a fourth day to its annual Christmas drive-through Nativity. It will be open from 6-9 p.m. Friday, Saturday and Sunday and then again Dec. 22. Pictured at last year’s event are, from left: Keke Carter, Joshua Maxwell and Emily Albritton.

Though it’s known as a drive-through Nativity, the annual Christmas event at New Sight Baptist Church is much more than that.

For four days, visitors can take a 30-minute tour of Jesus’ life, from birth to resurrection and beyond, said organizer Brenda Foster. Admission is free.

The Christmas village is open Friday, Saturday and Sunday from 6 to 9 p.m. and circles Forest Trail Northeast at the church. Lines start about 30 minutes before the procession begins. It’s a bit longer this year to allow a few more cars to make their way through each night, Foster said.

They’ve also added a fourth night to the calendar, opening the village Dec. 22 on the Sunday before Christmas.

About 20 scenes are set up around the church’s circle drive including the newest, a scene that shows Abraham’s faith and obedience to God with his son, Isaac.

Motorists can drive through the scenes and see the whole thing in about 30 minutes. The volunteer actors are mostly from New Sight, though members of other churches are lending a hand as well, she said. It takes about 130 people — including the 70 cast members — to put on the show. A few barn animals — sheep, cows and chickens — make appearances as well.

More than 2,300 people were part of the three-night procession that circled the church grounds last year. That’s way up from numbers eight years ago, when Foster estimated only about 800 drove through the village scenes.

Though it takes weeks of preparation and long hours in the cold to recreate the scenes from the Bible, Foster believes it’s all worth it. She’s been a part of the event for all of its 16 years.

“It gets tiresome but you have to think about it’s not about you, it’s about sharing the gospel,” she said. “I look it at it this way. If my Lord can suffer and die on the cross, and rise again, I can sit out there for whatever hours. It’s worth it in the end. It’s not about us. It’s about him.”

Surprisingly, the last scene in presentation is not Christ’s resurrection, though it’s shown as well. The final thing people see is a church and people learning about the Gospel.

“This was not the end of it,” she said of the resurrection. “There is a beginning if you choose that way.”

Foster said there’s a slight chance of rain Friday night and it could cause them to postpone the first drive-through.

“We’re going to pray it changes,” she said.

Foster is still looking for a few volunteers to help fill in a few spots in the village. To volunteer, call her at 601-754-3107 for details.