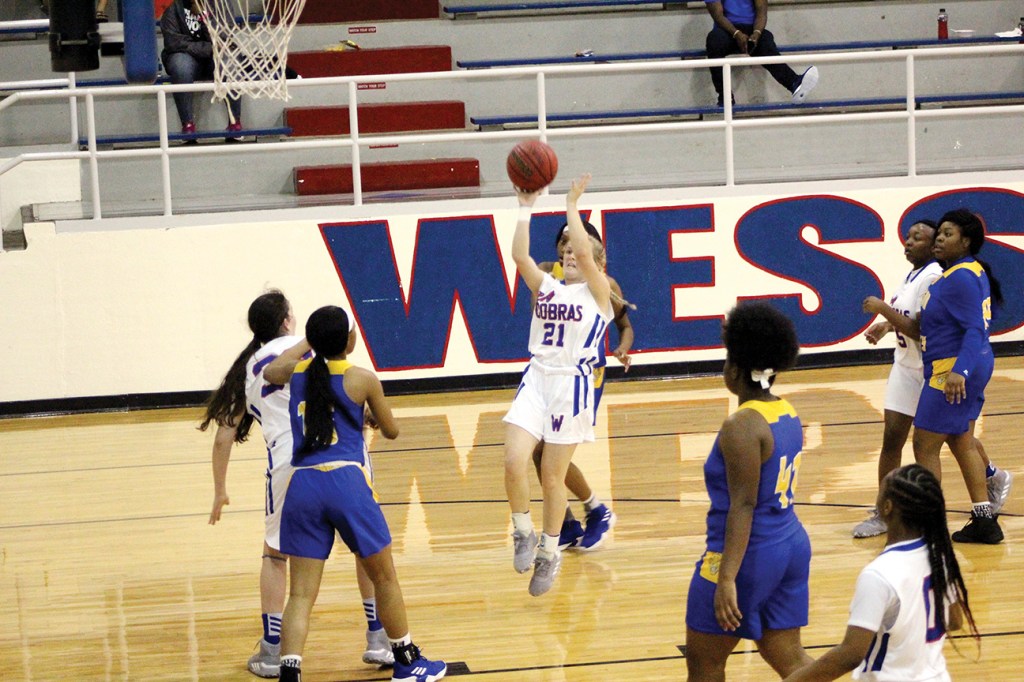 Photo by Cliff Furr Wesson senior guard Shelbi Maxwell glides into the lane to shoot a floater in the fourth quarter against Jefferson County Friday. The Lady Cobras beat JC in the opening day of their Holiday Shootout as Maxwell scored 11 points.

There was plenty to be happy about Friday for Wesson coach Michelle Nunnery and her team. They defeated Jefferson County in a close game that saw Wesson hold a steady, small lead throughout in their Holiday Shootout.

The Lady Cobras made the plays necessary at the end to hold on for a 42-39 win that was their seventh of the season.

In the previous three seasons combined, the Lady Cobras had only won seven total games. There are plenty more wins left on the Lady Cobra’s schedule as Nunnery continues to build her program in her second year as head coach.

That was all dampened, though, by an injury to Wesson sophomore center Breanna Grant-Hall that took place with less than two minutes remaining in the game.

Jefferson County was scrambling in their press defense and Grant-Hall was dribbling out of a trap in front of the scorer’s table when she went down with a visible dislocation of her ankle.

The game was delayed for a substantial period as an ambulance arrived and wheeled Grant-Hall off the court on a stretcher.

Jefferson County boys’ coach Marcus Walton gathered with the two teams in a circle and offered a prayer as coaches, teachers and trainers attended to Grant-Hall before the ambulance arrived.

The sophomore is a transfer from Hancock County and at near 6-foot with a soft touch, she’s a true post presence.

Grant-Hall scored eight first-quarter points and finished with 11 for WAC — which is her season average.

“She’s been playing really well, and I hate for her to have to go through this,” said Nunnery. “I was glad to see her smiling and joking with her teammates as she was leaving. It was tough, but I’m proud of the rest of the team for doing what it took to finish the game.”

Maxwell was a leader on a team that had five seniors last season and finished 2-24. Nunnery got plenty of experience for her young players last year and the Wesson junior high team finished 8-0 this season. She moved up some of those eighth graders when their season ended, and they’ve added depth to the varsity roster.

Senior guard Natassja James is another quick ball handler for the Lady Cobras and she pairs well with Maxwell on the front of the Wesson press defense to create turnovers. Sophomore guard Sarya Smitha and junior forward O’koya Barlow are two more experience pieces for Wesson.

Saturday night, Wesson lost a close 50-46 setback to 3A Forest High (7-5). The Lady Cobras will return the game on Friday for their final non-region game of the season.

A new member after being a 3A school for the previous six seasons, the Lady Cobras (7-7) will travel to Bogue Chitto (13-3) on January 7 for their first Region 7-2A game.

“We’ve still got work to do, we tuned the ball over too much tonight,” said Nunnery. “We’ve got to be better at handling pressure.”