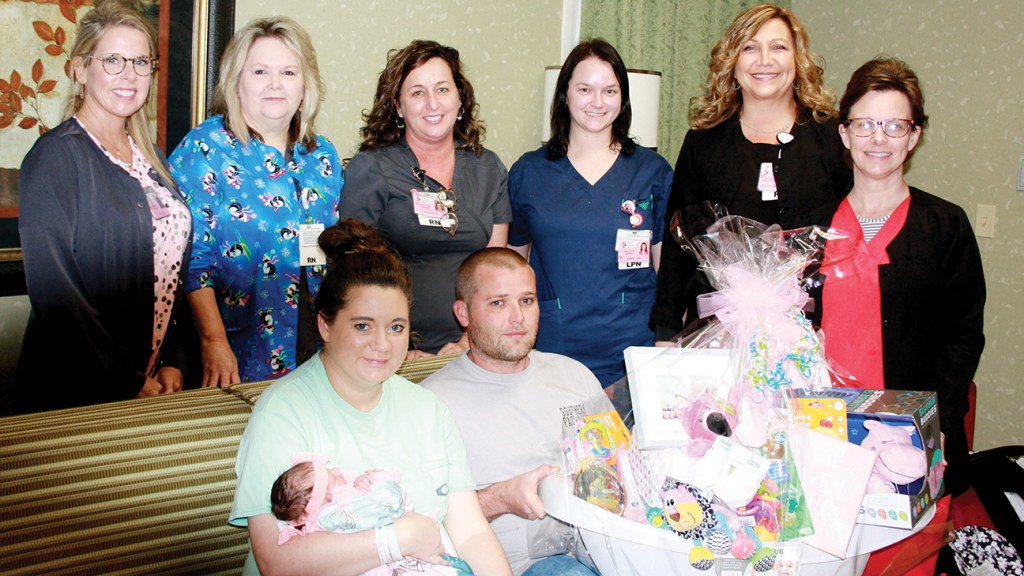 Hollie Gilbert planned to spend New Year’s Day finishing up the final touches to the baby nursery in their new home. After all, she and husband Jonathan had recently moved to Amite County from Meadville and with their baby due in two weeks, there was still lots to do.

However, no one told the baby there was a schedule in place and she was about to change their plans.

Gilbert went to bed before midnight New Year’s Eve, but woke up about 4:30 a.m. thinking she could be in labor. She went back to sleep for a few more hours then told her husband about 7 a.m. they might want to go to the hospital, which was an hour drive away.

But their well’s water pump had gone out and Jonathan Gilbert was replacing it. She wanted him to finish.

By 9 a.m. they were heading to the hospital and when she picked up the pen in the ER to sign her paperwork, her water broke.

That was actually a relief.

“My biggest fear was that he’d be delivering the baby,” she said of her husband.

The nurses in labor and delivery checked her for a few hours and just before 2 p.m. it was time. She started pushing at 1:53 p.m. and Hadley Gilbert was born a few minutes later weighing 6 pounds, 13 ounces.

It wasn’t until later in their room that Gilbert realized Hadley was the New Year’s baby. The hospital presented her with a gift basket that included a bath tub, baby book, photo album and frame, onesies, socks, blankets, stuffed animals, teethers, diapers, wipes and bath supplies.

The Gilberts, who will celebrate their sixth anniversary in March, already have a 3-year-old daughter, Natalie. She’s enjoying her job as big sister.

“She loves it,” Gilbert said. “That was her first words to me this morning when she woke up. ‘Where’s my baby sister?’”

Jonathan Gilbert is in love with his baby girl. He’s holding out hope for a boy, but Hollie Gilbert said that’s not likely to happen. She’s happy with a family of four.

“Unless a miracle happens, I don’t think so,” she said.

Hadley is the granddaughter of James and Carolyn Steele of Amite County, Michael and Patricia Gilbert of Franklin County and the late Judy Gilbert.