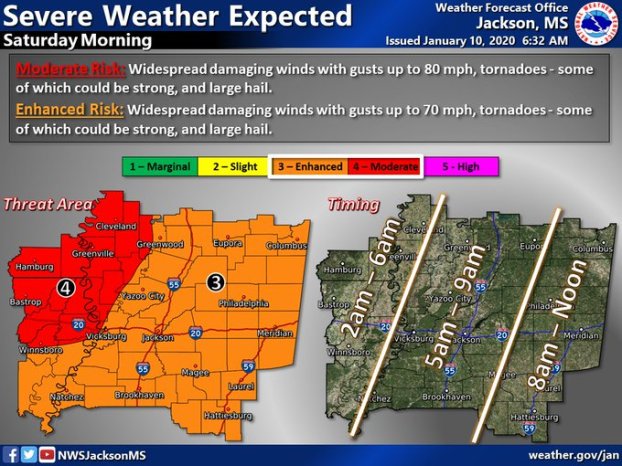 Weekend storms expected to be severe

Dangerous storms are once again expected to cover Mississippi Saturday, and Lincoln County Emergency Management Director Clifford Galey is warning residents that if the forecast changes at all, it won’t likely be for the better.

The National Weather Service’s Storm Prediction Center predicted much of Mississippi to be covered under the potential bull’s-eye of the storm as the threat moves eastward from Texas toward Alabama Saturday, with winds gusting up to 70 mph. NWS forecast models show a storm system stretching nearly 500 miles wide, and more than 500 miles north from the Gulf Coast.

The center also predicted that flash flooding is likely, due to waterways being at or near flood level from earlier storms.

In the event of a tornado, Galey said residents should get into the smallest, safest room on the first floor of a building.

“Usually that’s your bathroom,” Galey said. “(It’s) an interior room, away from outside walls — a closet maybe.”

“(Go somewhere else) if it’s possible,” Galey said. “That’s not one of the safest places to be at. Everybody be as safe as you can. If it happens, be patient with us and we’ll get to you as soon as we can.”

Brookhaven police are asking for the public’s help to identify a group of juveniles suspected of burglarizing vehicles and spray-painting... read more