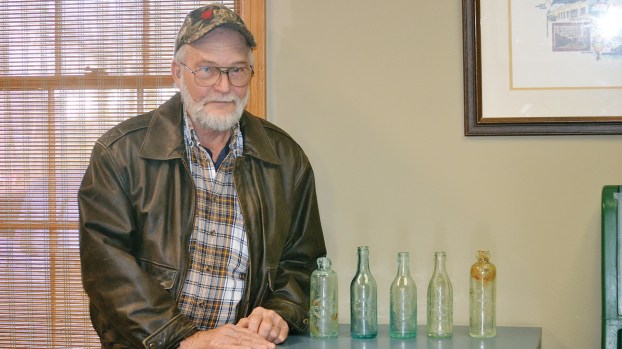 Photo by Donna Campbell David Bradford of Brookhaven shows some antique soda bottles he found recently at “a secret spot.” 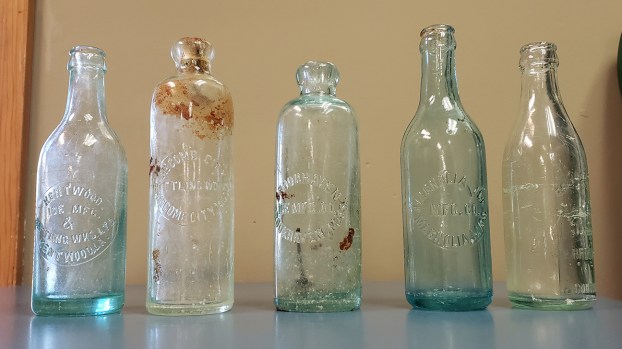 Photo by Donna Campbell David Bradford of Brookhaven shows some antique soda bottles he found recently at “a secret spot.” From left, the second and third bottles are called Hutchinson bottles because of the type of stopper used in them to keep their contents fresh.

David Bradford of Brookhaven has a love of history — discovering it and sharing it.

Bradford, 63, recently found a few antique soda bottles in very good condition in “a secret spot” in the county. The five clear glass bottles are marked with the name of the cities where they were originally filled with potable contents and offered to the public — Magnolia, McComb and Brookhaven.

These bottles were from the late 1890s to early 1900s, said Bradford, and two of them are called Hutchinson bottles.

“These were the first kind of bottles they came up with where they could actually put Coke and other drinks (and) bottle it up. Before that, you had to go into a soda fountain to get it because they couldn’t bottle it,” Bradford said.

Hutchinson bottles, named for their inventor Charles G. Hutchinson, employed a wire spring attached to a rubber stopper that sealed the bottle to keep the contents fresh. Hutchinson invented and patented the stopper in 1879, and they were in use until 1912.

The device meant beverages once available only inside the soda fountains could now be loaded on wagons and delivered to country stores to sell.

“I do a lot of metal detecting. It won’t pick up bottles, but it will pick up metal. A lot of people used to bury trash behind their house, and you can find metal and go from there,” he said.

He got his first metal detector for Christmas in 2001 from his wife. It’s a good hobby, he said, which allows him to get a lot of exercise and meet a lot of people.

The most valuable item he has found was a Confederate soldier’s belt buckle.

“It’s what they call the Holy Grail for metal detector hobbyists.”

He doesn’t own it anymore. He sold it because he misplaced it — it had fallen behind a bookcase — and he didn’t want it to get lost again. He thought a person who would display it and allow others to see it and learn from it would be a better owner of the historical object, so he sold it.

“Most of us are not in it to make money, but to preserve history, and hopefully to teach somebody and show somebody what people did and what these (items) mean historically,” Bradford said.

He found these bottles this past weekend in a spot where he’d found bottles before. A lot of people collect and dig for bottles, he said, but Brookhaven is not the place where most bottles are found. Older places like Natchez, Vicksburg and New Orleans are where people find “the really old bottles.”

With 18 years of metal detecting and digging under his belt, the newly-retired collector looks forward to doing a lot more, if he has time.

“I retired Friday from Paul Jackson Construction,” he said. “I’m semi-retired. My wife’s got 20 years of work waiting for me.”