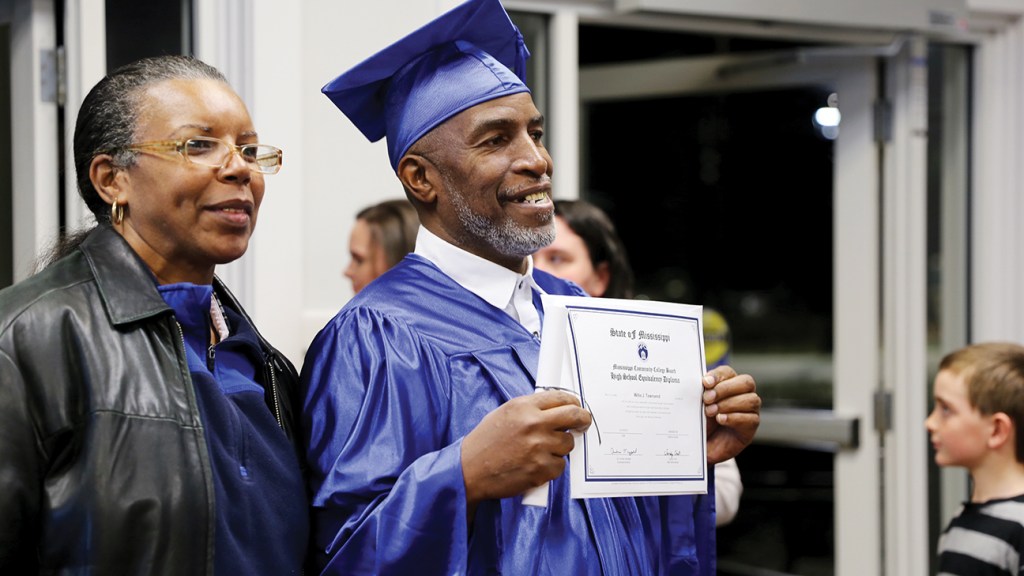 Willie Townsend weighed his options: Finish his senior year or get a job.

The 18-year-old from Loyd Star made a decision he’d regret for most of his life, but one that he recently remedied.

Willie J. Townsend, 58, was among the 18 graduates who received their High School Equivalency diplomas during a ceremony held on Copiah-Lincoln Community College’s Wesson Campus earlier this week.

“I dropped out of school as a young person and realized later it was the biggest mistake I’d ever made,” Townsend said from the podium. He wore a cap and gown and a big smile. “To all young people listening, I would say, do not drop out of school, do not quit.”

Townsend gave credit to God, his family, friends and Co-Lin teachers for helping him get to the finish line.

“It took a lot of hard work, some frustration along the way, and plenty of determination, but I finished,” he said.

Looking back, Townsend wished he’d finished school. His six brothers and one sister all graduated, but he was too impatient to wait. He thought he had enough credits but was one short.

“As I got older I realized what I did was stupid,” he said.

He got a job at a Brookhaven lumberyard which he kept for nearly 40 years. He married and raised a family, and when his children went to Loyd Star Attendance Center, his alma mater, he was adamant about good grades and graduation. Two of his three children even went on to college.

But as he grew older, the regret gnawed at him. He enrolled in an adult literacy program at Co-Lin, meeting for classes every Tuesday and Thursday for two years.

He’s been working at the state Capitol as a maintenance superintendent for four years, so friends and family questioned his desire for a diploma.

When he finally passed all his tests needed for his certificate he felt relieved and proud of his accomplishment. But why stop there?

He plans to enroll in a welding course at Co-Lin so he can get his certification. That way, when he retires, he’ll have a skill-set to fall back on for a side job.

“I’ve been working so long, there’s no way I could sit at home and not work,” he said.